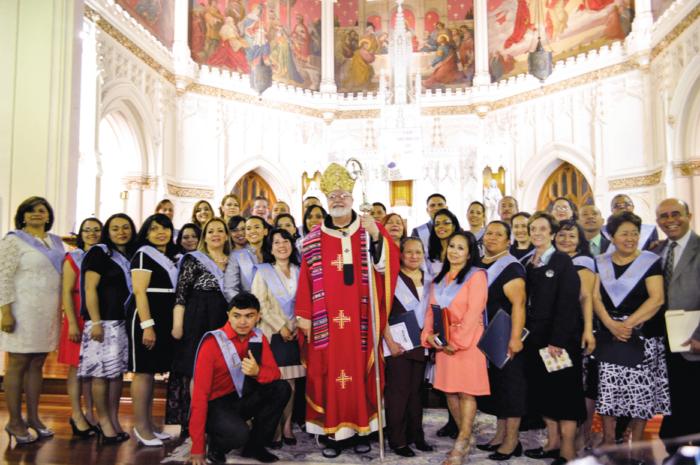 BRAINTREE -- The Spanish-language lay formation program of the Archdiocese of Boston, the Instituto de Formacion de Laicos, graduated 34 laypeople representing 13 parishes from their formation certificate program, May 14, at Immaculate Conception Parish in Everett.

Maria Pilar Latorre, assistant director for Hispanic catechesis, said the number of graduates reflects the vibrancy of the Hispanic community in the archdiocese.

"The Spanish community is alive and ready to serve," she said.

The institute is a program of the Office of Religious Education, designed and directed by Latorre. Since its inception, laypeople have graduated from the institute prepared to serve in parishes across the archdiocese. Students can earn certificates through the two-year program in evangelization and catechesis, parish leadership, liturgical ministry, youth ministry, hospital and prison ministry, or family and marriage ministry.

"We enjoyed a lot having him with us for the graduation. The homily was beautiful. He spoke about love, love of God, and love for the brothers and sisters whom we have close to us and the ones who are not so close, but we want to bring to the Lord," Latorre said.

After the graduation, the institute presented Cardinal O'Malley with a gift to show gratitude for his support -- a stole made by indigenous communities in Mexico.

Latorre said having Father Anzoategui on hand for the graduation was important for graduates, and it reflected his intentional service to the people he leads by being available to teach classes, participate in celebrations and, in this case, celebrate a graduation when he is needed.

"I think he is always in the place that he has to be," Latorre said.

Latorre said the theme of the graduating class came from the apostolic exhortation "The Joy of the Gospel" by Pope Francis. The class took the motto, "promotion of joy" in accordance with that theme.

Latorre said each graduate is not only of a mind to serve in lay ministry to their communities, but now stands prepared to do good work in the Church.

"We graduated 34. I believe that next year I will see at least 30 doing already their service in the different ministries that are available. I am totally convinced that they will do it, and I think they are prepared for it," she said.

She noted that families of graduates supported them as students, and attended the graduation.

"The families understand the need, and the families want to cooperate, and this is very important I think," Latorre said.

Informational material provided by the Instituto de Formacion de Laicos described the mission of the lay formation institute in the context of a rising number of Hispanics in the United States, a number that will soon constitute half of all American Catholics.

"We must become responsible for the future of the Church and the social structures in the country where we now reside as immigrants and the land where our children are growing up. We are not here by chance. Neither are we here only to make money," it said.

The mission statement encouraged Hispanic Catholics to engage the Church and the society of the country they have made their home.

"We live in moments in which many societies, not only the United States, need a new evangelization so that the message of Christ and the seed of divine life may be born and grow again in so many people around us. We have been called. The response is ours," the mission statement said.