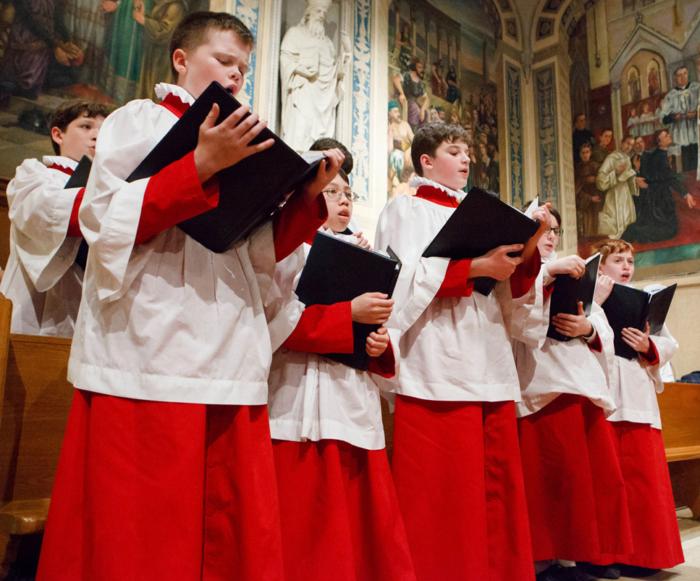 ATLANTA -- As part of their initiative for The New Evangelization to commemorate the 50th anniversary of the school, the boys of St. Paul's Choir School in Harvard Square have signed a recording deal with AimHigher Recordings. The highly anticipated first recording will be a Christmas album, slated to be released on Oct. 7.

The choir school is closely tied to St. Paul Parish in Cambridge and both are closely overseen by Father Michael Drea, who additionally oversees the Harvard Catholic Center, and has inspired many with his inclusion of the choir school within the parish.

In 2010, in order to further the mission of the boys' choir program, Father Drea recruited John Robinson, who hails from the U.K. Prior to this appointment, Robinson worked in a number of English choir school appointments, including Canterbury Cathedral and St. John's College Cambridge. Robinson currently serves as both the director of music at St. Paul Church Harvard Square and at St. Paul's Choir School.

"I couldn't be more excited about this opportunity," said Robinson. "Recording for AimHigher Recordings with the boys from St. Paul's Choir School was unforgettable, and I'm so looking forward to being able to share the singing of this unique choir of boys and men. The chance to sing beautiful Christmas Church music for a wider audience is something we are passionate about."

The Christmas album repertoire will be a collection of classic Christmas songs that have both traditional and contemporary arrangements, including some original arrangements by Robinson. The album was recorded May 7-9 at St. Paul Church, where a state of the art mobile recording studio was built.

Christian Landry, a sixth grade chorister at the school, who participated in the recording said, "We practiced for about 10 weeks for the recordings. It was unusual during Lent and Easter to be practicing Christmas music but it was very fun to be working toward such a high standard of being our best for the CD. Mr. Robinson prepared us very well."

"I'm really looking forward to Christmas this year as I already know what I'm getting my aunts, uncles and grandparents for a gift," he added.

Father Drea said he hopes that those who hear this new album will not only be entertained, but also inspired.

"I am so grateful for this recording opportunity that has been extended to St. Paul's Choir School," said Father Drea. "Having celebrated our 50th anniversary of founding in the midst of the great renaissance that is taking place at our school, this recording allows us to collaborate in the great endeavor that is the new evangelization. Sacred choral music, especially that which is centered on the Incarnation of our Lord, can serve to inspire countless people to rediscover, embrace anew or even encounter for the first time the gift of the Son of God made man. Having this opportunity to record our Christmas album will provide countless blessings for the future of our Choir and School."