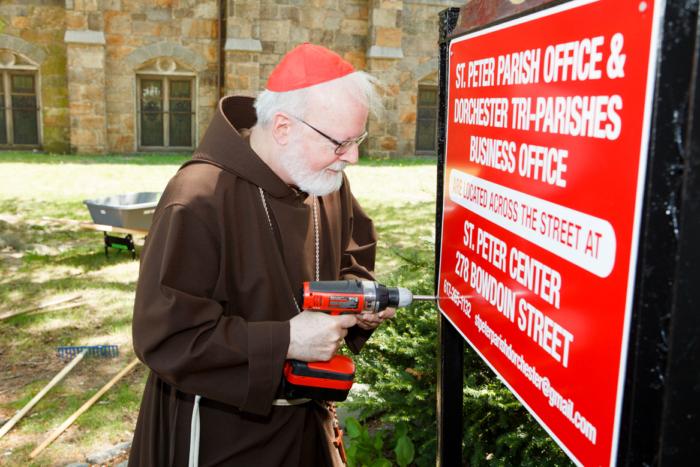 'During my visit with the workers I had an opportunity to get acquainted with an electric screwdriver for the first time. I discovered I am much more adept at the manual variety!' Pilot photo/CardinalSeansBlog.org

For us as Catholics, the celebration of the Eucharist is the most sacred event in our life as an ecclesial community. It is where Christ makes a gift of himself to us, where he gathers us as his people, where he feeds us with the word of life and with his Body and Blood. The whole meaning of Eucharist is one of love, sacrifice and unity. A 'black mass' is a sacrilegious parody of the eucharistic celebration. It is a negation of all of the ideals that are signified by the Eucharist. It is for this reason that the Catholic community was so disturbed by the announcement that a student group at Harvard was going to sponsor a black mass in one of their most venerable buildings, Memorial Hall.

We are very gratified by the response, both from within the Church and without. Over 90,000 Harvard students, alumni and others associated with Harvard signed a petition decrying the black mass. There was a great outpouring of support for the Holy Hour held at St. Paul's and the Eucharistic procession that was organized between MIT, St. Paul Parish and the Harvard Catholic Center. The huge crowds that participated in the procession and Holy Hour were a great sign of hope to all of us that the Catholic people cherish the treasure of the Eucharist, and that we would not passively ignore the outrageous assault on our faith represented by a black mass celebrated in the heart of one of the most venerable American institutions and premier universities. I am very grateful to all of those who supported the Holy Hour and the eucharistic procession and to those who in other ways expressed their opposition to the black mass. We were pleased that Harvard President Dr. Drew Faust attended the Holy Hour at St. Paul's. I think it was important for her to see the reaction of the Catholic Church gathered in prayer as a response to this threat to our beliefs.

On Monday (5/12), I went to Catholic Charities Teen Center at St. Peter's in Dorchester for the dedication of a bench in honor of former Boston Mayor Thomas Menino. The dedication was a way of thanking Mayor Menino for all the support he gave to the Youth Center and the community during his long tenure as Mayor of Boston. We heard remarks by Father Jack Ahern, Catholic Charities President Debbie Rambo and Teen Center director Paulo De Barros. Also joining us at the dedication were a number of volunteers from the pastoral center who were at St. Peter's Parish working to fix up the parish as part of our Employee Parish Service Week. So, after the dedication I went over to the parish to see how the work was going. During my visit with the workers I had an opportunity to get acquainted with an electric screwdriver for the first time. I discovered I am much more adept at the manual variety!