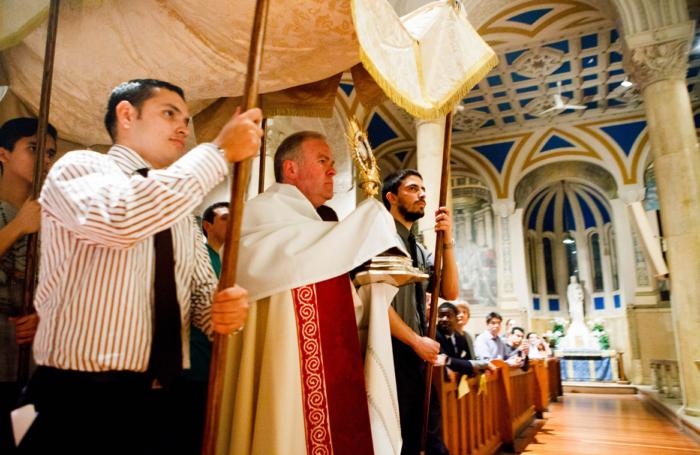 Harvard University chaplain Father Michael Drea carries a monstrance into St. Paul Church in Cambridge, Mass. to begin a Holy Hour held to coincide with a demonstration of a satanic 'black mass' was to take place at a pub on the Harvard campus. Pilot photo/Gregory L. Tracy

CAMBRIDGE -- Catholics and supporters of the Catholic Church overflowed from of St. Paul Church in Harvard Square, May 12, for a Eucharistic Holy Hour and Solemn Benediction in response to a planned re-enactment of a so-called "black mass" at Harvard University.

Controversy over the "black mass" erupted last week when it was reported that the Harvard Extension Cultural Studies Club would host the re-enactment to be held at Queens Head Pub in Memorial Hall, on campus. The Satanic Temple, a group known for promoting controversy such as pushing to have a Satan statue built outside the Oklahoma Capitol, wanted to perform what it called a re-enactment -- said to be an "inverted" recreation of the Catholic Mass. The organizers of the re-enactment claimed to have a consecrated host to use in the ritual, but later said they did not.

The Harvard Chaplains, Harvard Catholics, the university president, and many Harvard alumni issued statements condemning the re-enactment of what many saw as anti-Catholic hate speech.

Father Michael E. Drea, the senior Catholic chaplain at Harvard, condemned the event and invited the Catholic community of the university to the Holy Hour at St. Paul's Church near the campus at the same time as the re-enactment had been scheduled.

Father Roger Landry, a priest of the Diocese of Fall River and a Harvard graduate, said in a May 8 open letter to Harvard president Drew G. Faust that she should cancel the event, and said "for the first time in my life I'm really embarrassed to be associated with Harvard."

"Harvard simply would never allow itself or its properties to be associated with events that mock the religious beliefs, desecrate the sacred texts, or insult the spiritual sensitivities of Jews or Muslims," Father Landry said.

In a statement issued on the morning of May 12, the day the reenactment was to take place, Harvard president Faust condemned the re-enactment as "abhorrent" and "a fundamental affront to the values of inclusion, belonging and mutual respect that must define our community," but said she would not cancel the scheduled re-enactment.

Instead, Faust said, she would attend the holy hour at St. Paul's, "in order to join others in reaffirming our respect for the Catholic faith at Harvard and to demonstrate that the most powerful response to offensive speech is not censorship, but reasoned discourse and robust dissent."

Asked by reporters about Faust's statement later that day, Cardinal Seán P. O'Malley said he was "disappointed," adding that he "was hoping that Harvard would see how offensive and how evil this was, and at least ask them not to do it on their property."

Also that day, former president of the Harvard Catholic Student Association and co-founder of the Harvard Daughters of Isabella senior Aurora C. Griffin presented Faust with a petition opposing the reenactment signed by 60,000 people, including many Harvard students and alumni.

"The Harvard Cultural Studies program claims to emphasize the ritual's history. Historically, the 'Black Mass' mocks religious beliefs, defiles sacred items and symbols, and purposely insults the spiritual sensitivities of Harvard's Catholics, Christians, and other people of faith," Griffin said in a letter accompanying the petition.

A group of Catholics gathered at Massachusetts Institute of Technology before a Eucharistic Procession down Massachusetts Avenue to join the holy hour at St. Paul's.

As the Holy Hour got underway, news circulated that the re-enactment would be moved off-campus, and later that it had been cancelled -- though the Satanic Temple said on their Facebook page they held it at the Hong Kong in Harvard Square. News outlets said the owner of the Hong Kong reported no such activity.

In his homily at the Holy Hour, Father Drea thanked those who had come as an act of solidarity with the Catholic community, and conveyed word from Cardinal O'Malley who was in Washington to deliver the keynote at the 10th annual National Catholic Prayer Breakfast the next day.

"He unites his prayers with us," Father Drea said.

Father Drea said the light of Christ, represented by an Easter candle on the altar, invited believers to joy and peace in union with God.

"And that, my friends, is why we are here tonight praying, with trust and worship, in the presence of our Risen Savior under the appearance of bread," Father Drea said.

He said a threat to the Eucharist in an act of sacrilege "demands our prayerful and firm response."

Bishop Arthur L. Kennedy, an auxiliary bishop of the Archdiocese of Boston, gave remarks in closing at the Holy Hour.

"Tonight we have been able to stand truly against this evil as Catholics," he said.

Afterward, Faust told The Pilot she felt welcomed at the holy hour, and that she saw it as an important moment for the community to be together.

Matthew McCalla, a freshman at Harvard who served as an altar server at the holy hour, spoke to The Pilot after the holy hour about why he participated.

"I believe with all my heart that Jesus Christ is Lord, and that he is present in the Holy Eucharist. For the satanist group to come to campus at the heart of the intellectual world, at our school, and to desecrate that sacred mystery, that is sacred to myself, and to millions upon millions of Catholics throughout the world, it's hate speech. It's unacceptable to me. That kind of discourse doesn't have a place in a civilized society" said McCalla.

Among the non-Catholics who attended the holy hour in Christian solidarity was Bishop Brian C. Greene, senior pastor at Pentecostal Tabernacle in Cambridge and International Bishop of the United Pentecostal Council of the Assemblies of God.