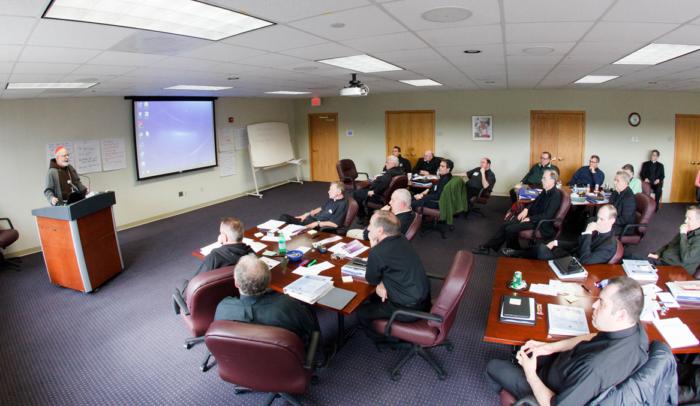 Cardinal O'Malley address the pastors of Phase II collaboratives during their training at the Pastoral Center May 6. Pilot photo/Gregory L. Tracy

Transition: noun tran(t)-'si-shen, tran-'zi-, chiefly British tran(t)-'si-zhen a : passage from one state, stage, subject, or place to another : b : a movement, development, or evolution from one form, stage, or style to another. (Merriam-Webster Online)

Transition is in the air. Monday, May 5, pastors of Phase II Collaboratives and Father Brian Kiely, episcopal vicar of the West Region gathered for their second training session in preparation for the June 3 inauguration of 20 new collaboratives. Staff from the Catholic Leadership Institute (CLI) in Philadelphia led the three-day training and helped pastors better understand and plan for the transition ahead. The mood was different from their first week of training in March. Then, it seemed that June was light years away and although the pastors worked hard, there was the luxury of talking somewhat theoretically. With June 3 less than one month away, there was a greater focus ("We want to get this right") and excitement ("Let's get started!").

Discussion began by looking at the differences between change and transition, the challenges of endings and new beginnings, and responsibilities of the leader during a time of transition. Moving conversation from abstract to concrete, pastors examined case studies involving change-related scenarios and identified strategies to help make transition easier.

As the week progressed, pastors were invited to look at their own style of serving and leading, and consider how that style will influence their work as pastor of a collaborative.

Some of these may come naturally, while others will be a stretch. Pastors need to recognize the behaviors and skills that are intuitive, and then hone the necessary behaviors that are not second nature.

The Archdiocesan Pastoral Plan, Disciples in Mission, is all about evangelization and growth -- growing in faith, growing in discipleship, growing in vocation awareness, and growing in membership. In 1992, the bishops of the United States wrote: "Evangelization is what we are all about! ... Evangelization is the essential mission of the Church!" St. John Paul II's 1982 address to priests was used to help pastors envision their role as CEO -- Chief Evangelizing Officer:

"Called, consecrated, sent. This triple dimension explains and determines your conduct and your lifestyle. You are 'set apart;' 'segregated,' but not 'separated.' What would separate you, would be to forget or to overlook the meaning of the consecration that characterizes your priesthood. To be but one more in your profession, in your lifestyle, in your way of living, in your political obligations, would not help you to fully carry out your mission. You would betray your own faithful who want you to be priests through and through."

Leading a collaborative of one, two, or three parishes is a challenge. The archdiocese has pledged the support of staff in the offices and agencies of the Pastoral Center. This Collaborative Support Team was available during the week for consultation on issues from finance and buildings to human resources and ministry, and will continue to be available to assist the new collaboratives.

Prayer was an important part of the week. Opening prayer on Tuesday included the passage from 1 Peter 3:15, "Always be ready to give an explanation to anyone who asks you for a reason for your hope." Reflecting on this verse, a pastor commented that one reason for his hope is that he sees the Lord's presence in his people.

Cardinal Seán P. O'Malley visited the pastors at the end of the second day. He thanked them for their sacrifice in making time to come to training sessions, and for their generosity and willingness to take on the challenge of leading a collaborative. Cardinal Seán recognized the good work of CLI staff, CLI vice president Dan Cellucci and Dennis Van Auken, leadership consultant, and expressed his hope that the strategies discussed during this preparation time will be a step forward in helping people understand that our mission is the work of evangelization. With the promise of his prayers and support, the cardinal closed his remarks by leading the pastors in singing the Regina Caeli.

The days of training involved hard work but were not without laughter, priestly fraternity, and good natured camaraderie. These 20 pastors concluded their training more confident and very grateful that the prayers of Catholics throughout the archdiocese are with them as they begin their work shepherding their collaboratives.

Susan Abbott is Coordinator of Parish Outreach for the Archdiocese of Boston's Office of Pastoral Planning.