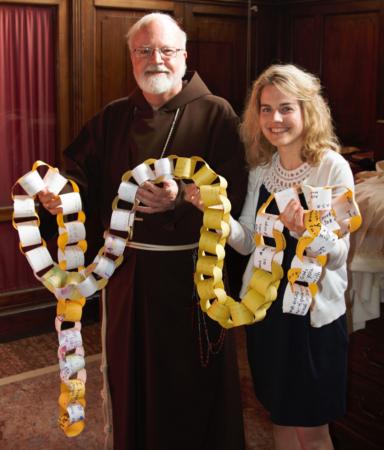 "We were so overjoyed to celebrate Saint John Paul II's canonization together as an Academy. Having over 600 members of the Saint John Paul II Catholic Academy community together was truly a beautiful testament to the man who inspires our students each day to be the very best that he or she can be," said regional director Sister Ellen Powers.

Courtney Wahle from the Archdiocese, who was on pilgrimage for the canonizations, brought a prayer chain created by the first communion classes at Saint John Paul II Catholic Academy to the Mass in Dorchester, after bringing it to the Canonization Mass in Rome where she was present for the Holy Father's final blessing to those in attendance.

"I offered to bring the prayers over with me, so that they would be blessed by Pope Francis. It was the school's idea to create a prayer chain," Wahle said.

Students wrote their prayers on pieces of paper that made up each link in the chain, and Wahle brought it with her to Cardinal Seán O'Malley's titular church in Rome, Santa Maria della Vittoria, before she attended the canonization April 25.