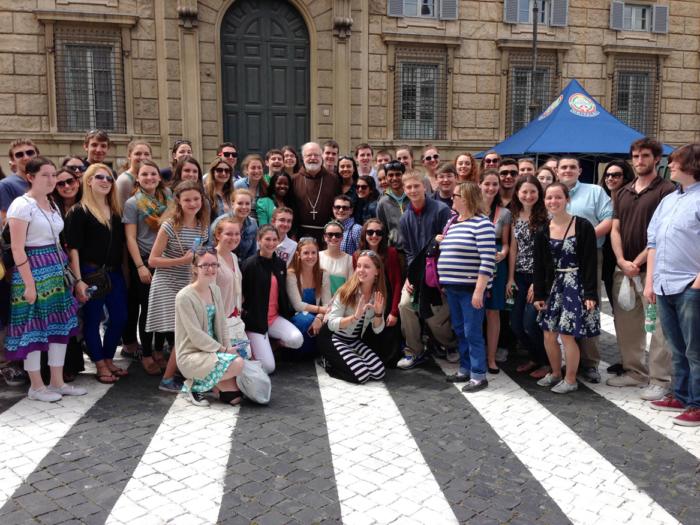 'This is a picture of a group from St. Catherine of Siena in Norwood. I didn't know they would be in Rome but we just ran into them, so we took a picture together.' Pilot photo/CardinalSeansBlog.org

As I mentioned in my previous post, last week I travelled to Rome to attend the canonizations of Popes John XXIII and John Paul II and have remained here for meetings with the Holy Father.

Leading up to the canonization, on Friday (4/25), I celebrated the Mass at my titular church in Rome, Santa Maria Della Vittoria, with the pilgrimage group that was there from Pope St. John XXIII National Seminary. In all, there were about 20 or 30 priests concelebrating the Mass and among them were four men who have served as rectors of the seminary: Msgr. Connie McRae, Msgr. Francis Kelley, Bishop Peter Uglietto and Father Bill Palardy. After the Mass we joined the group from Pope St. John's Seminary for dinner. We had lunch on Saturday (4/26) with the Franciscans from St. Leonard's Church in the North End who were also in Rome. They have a house of formation very close to the Vatican. So we all went there for lunch. That afternoon, there was a reception at the U.S. Embassy to the Holy See for some of those in Rome for the canonization. That night, Father Bob Oliver and I had dinner with the President of Paraguay, Horacio Cartes. They say it seemed like the whole world had come to Rome for the canonizations and I was beginning to think it was true because everywhere I went during those days, I kept running into groups of people from Boston... a group from St. Catherine of Siena in Norwood. I didn't know they would be in Rome but we just ran into them, so we took a picture together. I met another group from the Madonna Queen Shrine in East Boston who were there with Father Marcelo. They joined us for the Mass at Santa Maria Della Vittoria. There were also a number of priests from Boston who were in Rome for the canonization: Father Michael Drea, Father Dan Hennessy, Father Michael Nolan, Father Jeremy St. Martin.

This week, after the canonizations, the group of cardinals appointed by the Holy Father to discuss the reform of the Roman Curia met for three days to continue our work. We have finished the review of the Pontifical Councils and prepare the ground work to continue our meetings in July.

Thursday (5/1), on the Feast of St. Joseph the Worker, which is a holiday here in Italy, I had Mass with the members of the Commission for the Protection of Minors at the Tomb of St. Peter in St. Peter's Basilica and that day we began our meetings. This is the first meeting of the child protection committee, which is a very important initiative of Pope Francis. We have a distinguished international group including a member of the British House of Lords, a former Prime Minister of Poland, a very well-known survivor of sexual abuse by clergy from Dublin and experts in psychology and Canon Law. This committee will help to advise the Holy Father on best practices for child protection in Vatican City and throughout the world. This morning we had Mass together with the Holy Father at Domus Sanctae Marthae. These meetings will last until Saturday, after which we will have a press conference to report on our progress. Then on Sunday, I will return to Boston.