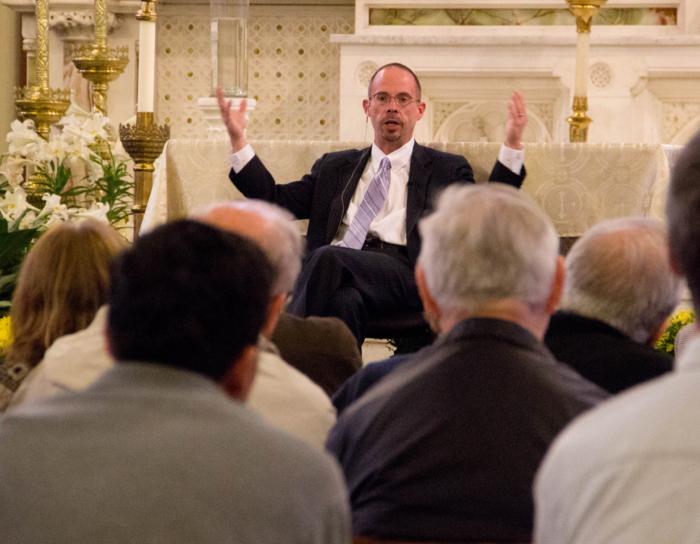 CHARLESTOWN -- At a local parish lecture, Vatican analyst and journalist John Allen Jr. tried to pin down and define the exact nature of what has become known as "The Francis Effect."

Delivering the 2014 Annual Gallagher Lecture at St. Mary's Church in Charlestown, May 4, Allen, who recently joined the Boston Globe as associate editor specializing in coverage of the Vatican and the Catholic Church, tried to pinpoint exactly what makes Pope Francis so central in the collective attention of Catholics, the media, and the world. Over the course of his career spanning more than 15 years with Catholic and secular news outfits, Allen has worked as a correspondent for the National Catholic Reporter and Vatican analyst for CNN and NPR.

He noted that Pope Francis recently surpassed 12 million followers on twitter, broke a record held previously by the Rolling Stones when he drew more than 3 million people to a 2013 public event in Rio de Janiero, Brazil, and polls at a 90 percent approval rating among American Catholics.

"It is a hardcore empirical, take-it-to-the-bank fact that in every corner of the world in which public opinion can be scientifically measured this pope has poll numbers that politicians and celebrities would sacrifice their children to pagan gods for," he said.

"The truth of it is that under ordinary circumstances it would be tough to get 90 percent of American Catholics to agree that today is Sunday," he added.

Much of Allen's explication on the pope's media appeal included anecdotes from his experiences while reporting and covering the early days of the papacy.

"I speak now as a media professional. I don't think there is any serious doubt that Francis has become the new media icon -- the new sort of towering source of the world of reporting on the global stage. In many ways, I think you could make the argument that Francis is the new Nelson Mandela. In a way in the media business he now stands for a kind of unquestioned, street-credibility as a world leader," he said.

He drew on his experience to explain how Pope Francis connects with people on a personal level.

Visiting a slum in Argentina after the conclave, Allen had asked locals if then-Cardinal Jorge Mario Bergoglio lived up to the moniker "Bishop of the Slums."

"Before they even verbalized the answer, they would run back into the little shacks -- the tin shacks -- that they called homes, and they would bring out these prized photos showing Bergoglio baptizing their kids, or confirming their nephews, or sitting in their living room when their husband had died offering them consolation," Allen said.

Sporting an injured leg incurred at his most recent trip to Italy for the canonizations of Pope St. John Paul II and Pope St. John XXIII, Allen said there are three key pillars to making sense of the personality and papacy of Pope Francis.

First, Allen said the pope sees the principal of leadership as a role of service, something that the pope's action intentionally emphasize.

"Beneath that humble, simple exterior lies the mind of an incredibly savvy Jesuit politician. This pope knows what he is doing all of the time. So, he was quite conscious that those gestures in the early days -- that have continued during the first 14 months of his papacy -- those gestures aren't just spontaneous indulgences of his own instincts. They are intended to set a new standard for what the leadership in the Catholic Church looks like," Allen said.

He said he was not presenting a journalistic theory, or a personal hunch, but the reality confirmed by public statements and actions made by Pope Francis.

"Fundamentally, I think that what Francis wants is to achieve a kind of Copernican revolution in perceptions. What he wants is that when people look at the symbols of authority in Catholicism, when they look at pectoral crosses, when they look at Roman collars, he wants them instinctively to think in terms of service rather than in terms of power over the Church," he said.

Allen also touched on a key theme developing throughout the papacy, what Pope Francis calls the "missionary option."

Finally, Allen pointed to mercy as the most important Christian message or "the spiritual cornerstone of this papacy."

"I am profoundly convinced that everything that Francis is doing, from the nitty-gritty details of how he reorganized the Vatican Bank on up to a pastoral policy on divorced and remarried Catholics, and beyond, all of it fundamentally, is predicated on the ambition that when the outside world looks at Catholic Church, what they will see is a community of mercy -- a community that doesn't just pay lip service to mercy, but genuinely practices it in its day-to-day life," Allen said.

He said that the pope must not become a dividing point in the Church. Those who agree with Pope Francis must not use his likeness as a hammer against opponents, while those who disagree should not always race to slam papal teaching in the blogosphere.

But he also pointed to the analogy Pope Francis used when he called the Church a "field hospital," and added that lay Catholics have a function in that vision.

"If we can take advantage of the new missionary opportunity that Francis has created, if we can project a new modern sconce, summoning the best in ourselves to construct this field hospital that will fling open its doors to the world that is desperately in need, and even in peril. If we can do those things, then ladies and gentlemen, we have a winning strategy for the new evangelization in the early 21st century every day of the week and twice on Sunday," he concluded the talk.