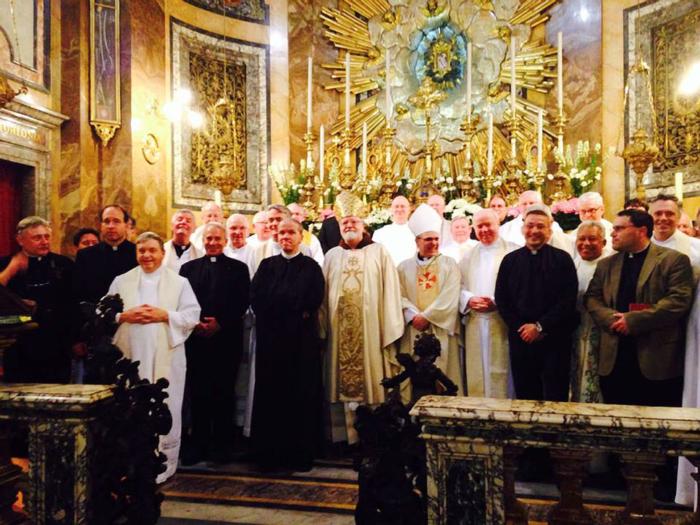 WESTON -- A group of some 47 pilgrims with ties to now-Pope Saint John XXIII National Seminary were among the hundreds of thousands of pilgrims gathered in Rome to witness the canonization of Pope John Paul II and the patron of their seminary, Pope John XXIII.

"To be celebrating our 50th anniversary and to have our patron canonized is really an incredible moment," Father Palardy told the CatholicTV Network, while on the pilgrimage.

Those taking part in the pilgrimage left Boston April 22 and arrived back April 29, toured holy sites in Italy, reconnected with former rectors of the seminary, celebrated Mass with Cardinal Seán P. O'Malley on their trip, which culminated with the canonizations of the two popes in St. Peter's Square.

The pilgrims experienced a Mass celebrated by the seminary's former rector, now vicar general of the archdiocese, Bishop Peter J. Uglietto at Cripta Porziuncola in the Basilica of Our Lady of the Angels, before experiencing some of the Holy sites of the area that included a stop at the basilica and tomb of St. Francis.

As pilgrims experienced a Mass celebrated by Cardinal O'Malley at Santa Maria della Vittoria, four generations of men who served as rectors of the seminary surrounded the cardinal. Msgr. Connie McRae and Msgr. Francis Kelly joined the cardinal with Father Palardy and Bishop Uglietto on the altar of the cardinal's parish in Rome.

"Knowing that our seminary is named for Pope John and having so many be able to be here to be a part of the canonization is very special," the cardinal told Catholic TV.

Father Palardy said a former episcopal priest from New York he met at one of the sight-seeing stops noted something he found significant about each of the two popes to be canonized.

"He said both of these popes lived up to their name of pontifex. You know, we call the pope pontifex maximus. Pontifex means bridge builder," he said.

Father Palardy noted a sense of universality and continuity not only in the ritual itself, but in the presence of two living popes honoring two previous popes. He said Msgr. Francis Kelly, another former rector the group bumped into on their travels, got himself and Father Murphy seats near the front of the canonization.

"We were sitting right near the statue of St. Peter, where our seats were, and to be there with the current Pope Francis, with the Pope Emeritus Benedict, canonizing two previous popes, I mean, just the sense of the extension of the Church in time. You think of that these are all successors of the apostles, and of Peter in particular," he said.

Blessed John is the only seminary in the United States administered by diocesan priests that trains men over 30 for the priesthood. The seminary has graduated over 600 alumni since it was established in 1964.

Father Murphy said he learned on the trip that Pope John XXIII received ordination to the priesthood at the age of 22. He said though the pope was a man with an early-age vocation, he still inspired the work of the Westwood seminary that trains men for the priesthood later in their lives.

"In one sense there is not a correlation, but he was also aware and spoke about the call from God to priesthood that could come at any time in a man's life," Father Murphy said.

Father Palardy explained why the new name will contain both words, pope and saint, in the title.