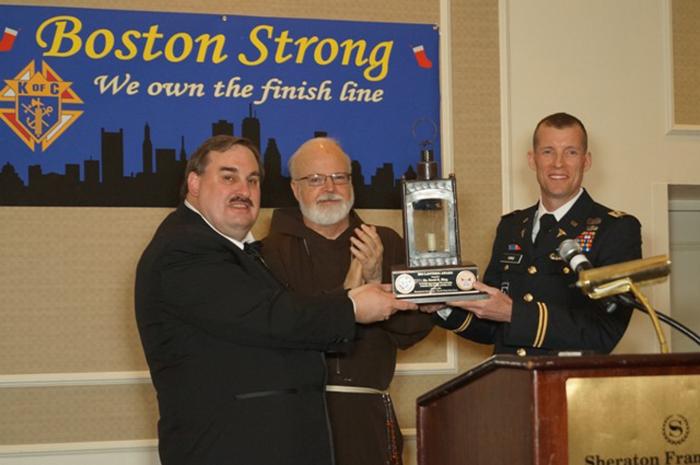 Some 500 guests gathered at Sheraton Framingham Hotel April 21, for the Massachusetts State Council of the Knights of Columbus annual Patriots' Day Dinner and Lantern Award presentation.

The Lantern Award is given each year in recognition of the recipient's contributions to society.

This year, the 58th Annual Lantern Award was presented to Dr. David King, a surgeon at Massachusetts General Hospital and a Boston Marathon runner, who after running in last year's Boston Marathon and spent 30 hours operating on victims of the marathon bombing.

Dr. King is also a lieutenant colonel in the U.S. Army Reserve and has served in both Iraq and Afghanistan as an Army surgeon. He is expected to be deployed again soon.

The Lantern Award was established during the tenure of State Deputy James H. Norton, who served from 1956-1958. State Deputy Norton inaugurated the award to honor those who reflected the religious and patriotic ideals of the Founding Fathers. The award is named for the lanterns placed in the tower of the Old North Church in Boston to signal Paul Revere.

It was first given in 1957 to J. Edgar Hoover, the late director of the FBI, and subsequent recipients have been women and men, distinguished leaders in public life from field of politics, religion, medicine, education, the judiciary, the military services and sports. It is presented each year on Patriot's Day.