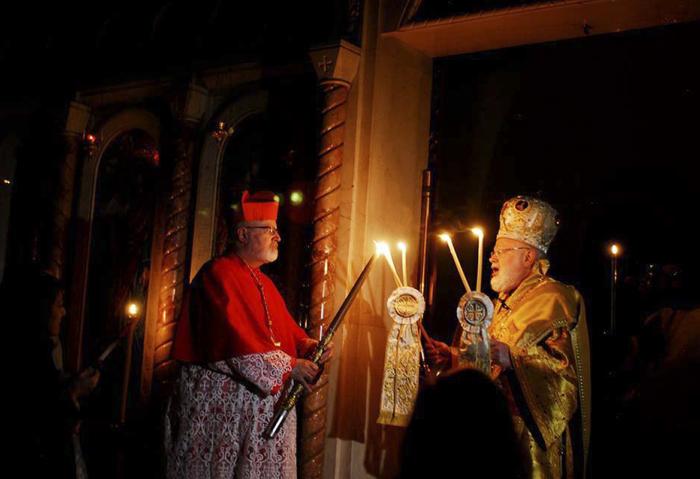 After celebrating the Easter Vigil at the Cathedral of the Holy Cross, Cardinal O'Malley attended the Easter Vigil celebrated by Greek Orthodox Metropolitan Methodios at Annunciation Cathedral in Brookline. Pilot photo/courtesy Alexander Mavradis

This year, the date of Easter in both the Julian calendar used in the Eastern Churches and the Gregorian calendar used in the West, fell on the same day. It provided a common date of celebration of the Risen Christ, as the Church leaders continued the tradition of the metropolitan's visits to the Cathedral of the Holy Cross for the Chrism Mass during Holy Week, and the cardinal's visits the Greek Orthodox cathedral on Greek Easter as a sign of the desire for unity between the two churches.

"Your eminence, my esteemed and respected brother in Christ, Cardinal Seán, brother priests, and my brothers and sisters, it is always a joy for me personally and for all of you, I am sure, to have with us, during our Easter Vigil, his eminence the Cardinal Archbishop of Boston," Metropolitan Methodios said.

He noted that this year marks the 50th anniversary of a meeting held in Jerusalem at the Mount of Olives between Pope Paul VI and Ecumenical Patriarch Athenagoras I in 1964, that led to further acts of unity that ultimately rescinded the excommunications of the Great Schism of 1054.

"It was a meeting which captured the attention of the entire world, because it was the first meeting between the heads of the Churches since 1438. It marked a dramatic turn for the Churches from alienation to brotherly engagement," the metropolitan said.

Cardinal O'Malley and Metropolitan Methodios continued that spirit of engagement at the vigil, and mentioned the upcoming meeting between Pope Francis and Ecumenical Patriarch Bartholomew I during a May pilgrimage to the Holy Land.

Delivering his remarks at the vigil, Cardinal O'Malley read from a statement by Patriarch Bartholomew on the upcoming pilgrimage.

"Two thousand years ago, it was in Jerusalem where the Light dawned from the Tomb. May it be in Jerusalem again where the light of peace, mutual trust, and brotherly love shines brightly, for the sake of our two Churches and the sake of the whole world," the cardinals said quoting Patriarch Bartholomew.

"I know that we all share these same sentiments," Cardinal O'Malley added.

Having come directly from the Easter Vigil at the Cathedral of the Holy Cross in the South End, the cardinal expressed his thoughts on the significance of the ecumenical outreach, and the upcoming historic meeting of the two church leaders.

"My presence here at this joyful Easter celebration affords me the opportunity to express the love, our thanks, for the ministry of his eminence the Metropolitan Methodios, and to reiterate our congratulations for his three decades of service as the Greek Orthodox Metropolitan of Boston," Cardinal O'Malley said.

Associate director of Ecumenical Affairs for the Archdiocese of Boston, Vito Nicastro, said the Catholic-Orthodox ecumenical outreach in the Boston area has garnered attention even from other parts of the world.

"Because the relationship is made incarnate on the local level, Boston has become a sort of treasure for the whole Church, because there are not many places, I think, where the ecumenical relationship has been so fully developed and expressed in fidelity to the Church's teaching," Nicastro said.

He called the ecumenical outreach between the two Churches in Boston, throughout Massachusetts, and on the upcoming global scale more than an honor, but a significant moment of evangelization from the two Churches as one group of believers, in a sense presenting the Gospel to the world in a unified statement of solidarity.

"It isn't only an honor, it's an evangelization moment because Orthodox and Catholics -- three quarters of the Christians on the planet -- need to proclaim together our faith in the resurrection," he said.

He said the cardinal pointed to the message of the ecumenical patriarch to emphasize critical needs in the pursuit of further Christian unity.

"We need peace, certainly the peace of making peace with our past, and we need mutual trust. I think this is so critically important, because for all of our Churches to make changes -- changes which are not just going to require effort, but maybe sacrifice and difficulty -- we need to trust each other, and brotherly love is the most important of all," Nicastro said.

"The stakes are so high, the cardinal quotes the ecumenical patriarch as saying the stakes are for our own two Churches and for the world, and that's echoing Jesus' prayer, Jesus Himself, his dying wish in the Gospel of John chapter 17 verse 21, where it says, I pray that they might be one, that the world may believe. So, it really comes down, ultimately, to what is most important, that we reflect the unity which is the nature of God, the reconciliation of the Gospel, and the key to the world believing," he added.