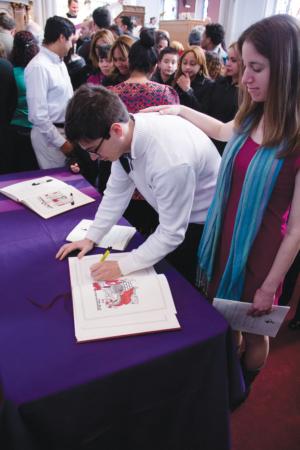 Catechumens -- those who have never been baptized -- sign the Book of the Elect at the Rite of the Election held at the Cathedral of the Holy Cross March 9. Pilot photo/Christopher S. Pineo

The Rite of Christian Initiation of Adults is the normal way in which adults (anyone over the age of seven) become full, active, participating members of the Roman Catholic Church.

RCIA is not just a "convert class" with a new look and fancy name. Adults involved in RCIA may be dismissed each week after the homily to go and reflect on the scriptures they have heard. RCIA involves the whole community -- in prayer; in hospitality; and in ministries such as sponsor or godparent; or team member.

The most important thing to keep in mind about RCIA is this: it is not merely a new way to prepare adults for baptism; baptism is only one step. The goal of the process is full communion which means "full, conscious and active participation" in the Eucharist and in the whole life of the Roman Catholic community of faith.

RCIA helps adults to grow in their relationship with God, become familiar with Catholic teachings and practices, be acquainted with people in the community and be involved in service of the wider community.

Some who want to become members of the Catholic Church may have already been baptized in another Christian Church. They will not be baptized again, provided that the baptism is valid, that it is recognized by the Roman Catholic Church. Called candidates for full communion, they will follow a form of these four steps adapted to the particular needs and concerns of Christians from another tradition.

How someone comes to consider joining the Catholic Church is unique to each individual. Years of marriage to a Catholic spouse, conversations with a Catholic friend or co-worker or even something written or viewed in the media can move an adult toward membership in the Catholic Church. Informally, this can go on for years!

At some point, the person may contact a Catholic parish or community and begin to meet with other adults who are also inquiring about the Catholic faith. These adults, with members of the RCIA team, will take time to tell their own stories and connect them with the faith stories found in scripture.

Some of the inquirers become firm in their desire for initiation and decide that they would like to begin more formal study of the teachings and practices of the Catholic Church. They are admitted into the next step through a special ceremony called the Rite of Acceptance into the Order of Catechumens. In this ritual the Church symbolically claims these men and women for Christ by signing them with the cross.

This is the first time that the inquirers publicly declare their faith before the community. Because no one likes to do something like that on his/her own, each inquirer is accompanied by a sponsor. Sponsors may be chosen by the individual or provided by the community. Sponsors provide support and companionship for the rest of the RCIA process.

After this rite, the inquirers are called catechumens. This name indicates that they are learning the teachings of the Church and beginning to accept Catholic tradition and practices.

The time spent as a catechumen will vary from person to person. The bishops of the United States have suggested that this catechumenate period is to last for at least one year.

Rite of Election and the Period of Purification and Enlightenment

The period of the catechumenate ends when the catechumens discern, with the help of their sponsors and the parish RCIA team, that God is calling them to receive the sacraments of initiation (baptism, confirmation, and Eucharist) at the next Easter Vigil. Before they can be initiated, they must be called to the sacraments by the bishop or someone designated by him. This Rite of Election is often celebrated on the First Sunday of Lent in the diocesan cathedral.

The Rite of Election marks the end of formal study of the teachings and practices of the Church. The catechumens are now called the elect. The weeks of Lent are a time of intense prayer as the elect prepare themselves to celebrate the resurrection of the Lord at Easter and to receive the sacraments of initiation.

On the Sundays of Lent, the elect are prayed for in a special way to help them prepare more fully for the sacraments. The sponsors continue to accompany the elect in church and support them in their Lenten preparations.

On Holy Saturday, the community assembles for the Easter Vigil. The Church has always recognized that in baptism, we die to sin in Christ's death so that we may rise to new life with him. The Easter Vigil is the primary celebration of the Lord's Resurrection and is, therefore, the most appropriate occasion for the elect to celebrate their Baptism, Confirmation and First Eucharist.

For the newly initiated, now called neophytes, the time between Easter and Pentecost is a special opportunity to reflect on the commitment that they have made to the Lord, to the Church and to the local Catholic community. This time of unfolding the meaning of the initiation sacraments is called mystagogia. The Sunday scripture readings, which explain the meaning of the resurrection and of baptism, have special meaning for these new Catholics. During this season, the bishop may gather the neophytes for a special eucharistic celebration called the Mass of the Neophytes.

The journey of faith lasts a lifetime. The weeks after Easter are a time for new Catholics to seek out their place in the community. Other community members can reach out to welcome them, helping them to get involved and feel at home.