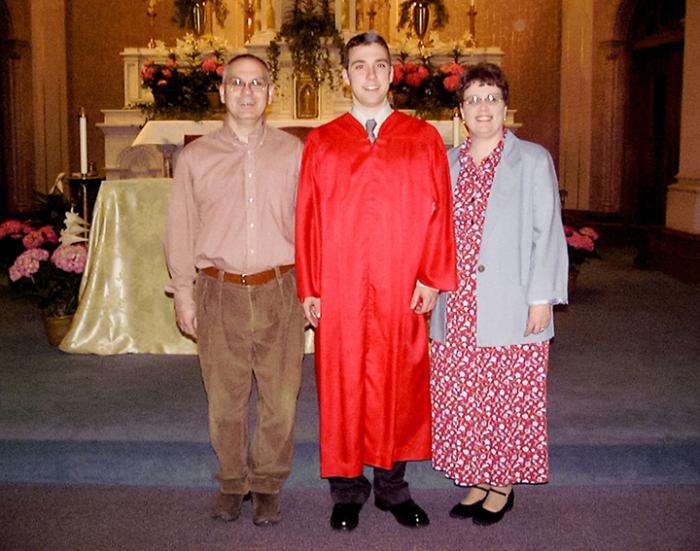 "Wisdom reaches mightily from one end of the earth to the other, and she orders all things well" (Wisdom 8:1). With ordination to the priesthood only weeks away, an important truth appears clearer to me now than ever before: God remains an intimate and active presence in our lives at every moment.

The human person is set on course that extends from God to God -- from God who is our creator to the same God who is the goal of our life. This destiny -- heaven, eternal happiness with the Father, Son, and Holy Spirit -- is not something we can attain on our own. God himself makes it possible through the Incarnation, death, and resurrection of his Son. The Catholic Church continues to make these sacred mysteries of salvation operative in our lives. In other words, the Church gets us to God.

In our confused and broken world, the Church provides the remedies to sin and the sure means of salvation: she communicates the truth of who God is; her holy teaching helps us distinguish acts that lead to human flourishing from those that do not; her sacraments impart the grace that makes us share, even now on earth, in God's life. The importance of the Rite of Christian Initiation of Adults (RCIA) becomes clear: it prepares men and women seeking baptism and confirmation to embrace a full and intelligent practice of the Christian faith.

I was baptized in the Catholic Church as an infant, but my parents soon began worshipping in a Protestant community. As I grew up, we took our faith seriously and, though I had no hostility toward the Catholic Church, I believed that anyone committed to the Bible and a personal relationship with Jesus could do better than the Catholic Church. When I went to Gordon College, an evangelical college on the North Shore, I could no longer follow my parents to church. I tried several different congregations, and settled for a time in an Anglican community. The liturgy, the formality, the ancient words and gestures: they helped me to see more clearly that the Christian faith was not a recent invention and did not depend upon the ingenuity or learning of a pastor. Eventually, through reading, prayer, and providential encounter with the Catholic author Thomas Howard, God opened my eyes to the full truth of the Catholic Church. In the fall of 2003, a few months after graduation, I began RCIA at St. Mary, Star of the Sea, in Beverly.

Our program followed closely the pattern of the Catechism of the Catholic Church: the Creed, the sacraments, the commandments, and prayer. We learned about Catholic teaching and practice. We went to Mass. We prayed. RCIA helped me to see that the Catholic faith provides a coherent account of reality. The Church does not preach fairy tales.

At the Easter Vigil of 2004, I was confirmed and received my first Holy Communion. (My parents, I am happy to relate, returned to the Catholic faith.) A few months later I was on a flight to Europe to begin studies in theology at a small institute in Austria. One of my professors was a Dominican; one summer while studying German, I was able to live in the Dominican priory in Vienna. I discovered happy, intelligent, young men who had given their lives to God and the Church.

I find that people frequently experience anxiety over discerning God's will for their lives. When we recall that God is not trying to trick us, that his infinite wisdom guides all things mightily and well, and that he will not abandon us, anxiety gives way to confidence. "He saved us and called us to a holy life, not according to our works but according to his own design and the grace bestowed on us in Christ Jesus" (2 Tim 1:9). Drawn by my experience of the Dominican life -- prayer, study, preaching for the salvation of souls -- I applied to join, entering the novitiate in 2008.

Human love responds to goodness perceived in another and in the good things of the world. God loves because of who he is: "Deus caritas est" (1 Jn 4:8). The truth that God loves us not because we are good but because he is good ensures us that God's love remains constant even when life does not appear to be going mightily and well. In the midst of suffering and disappointment -- whether as a result of our own or others' choices, or for seemingly no reason at all -- even when we feel trapped by sin, God is working in our lives. The Church remains our lifeline, our constant contact with his mercy and love. Sin is never the last word. God is not defeated. "Behold, I make all things new" (Rev. 21:5).

It is the boast of the Catholic Church, to borrow the words of Blessed John Henry Newman, that it has the gift of making the heart pure. Our Lord reveals in the Gospel that the pure of heart see God. The Church, then -- without any trace of fancy or exaggeration -- enables us to see God. Through RCIA, the example of the good and faithful priests in the Archdiocese of Boston, and the circumstances of my own life -- even when I did not see or feel it -- God prepared me for my own vocation within the Church.

Brother Sebastian White, OP, is a Dominican friar of the Province of St. Joseph (Eastern Province of the United States). He will be ordained to the priesthood with seven other friars on May 23, 2014, in Washington, D.C.