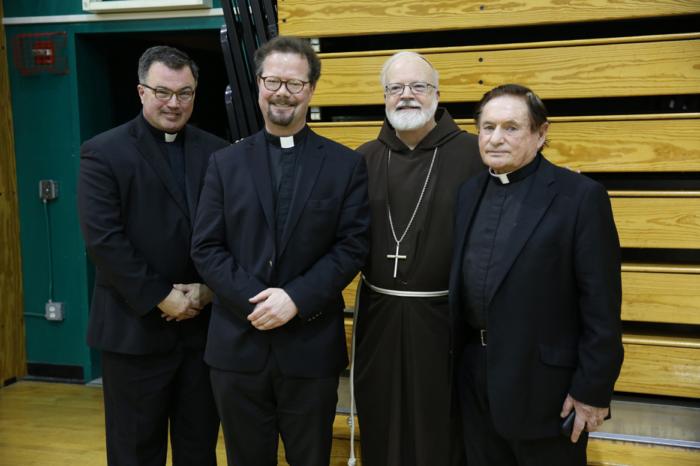 SOUTH END -- Priests gathered at Cathedral High School, April 15, to honor three of their own in a celebration of fraternity after the Chrism Mass.

Father Clary, pastor of St. Mary of the Assumption in Brookline, found inspiration for his vocation in his family and at his home parish at St. Mary's in West Quincy, received ordination in 1997, and serves the archdiocese as the director of the Priest Recovery Program.

He spoke about the support he received years ago as he worked to recover his sobriety.

He said priests have told him that recovery makes him part of an "elite group," since as a recovered priest he will be expected to show greater compassion in his work.

Father Nolan, pastor of Most Precious Blood in Hyde Park, received ordination with the Holy Ghost Fathers in 1959 in Dublin, Ireland, before he came to the archdiocese in 1985.

"I am very honored to be chosen by this holy group, this particular group of priests. As a matter of fact, it's like I was a stranger and you took me in," Father Nolan said.

Father Nolan spent eight years in Nigeria, taught himself the local language, and showed what Father Blaney called "great missionary zeal -- the zeal of the apostles themselves" when he refused to leave his missionary work feeding the hungry during a civil war.

"We didn't ask them if they were Catholic, or Christian, or Muslim, we just fed the people," Father Nolan said. "It's interesting, the pagans, as we were calling the old pagans, and the chiefs at the time, they were very impressed because all the white people had left."

The Church where Father Nolan served grew rapidly after the war, and the people of Nimo, Nigeria made the Holy Ghost Father an honorary chief in 2012.

Father McHugh, pastor of St. Catherine, St. Joseph and St. Ann in Somerville, grew up attending St. Michael's Parish in Lowell and received ordination in 1986. In addition to his parish work he serves on the presbyteral council and as a chaplain in the Air Force Reserves.

Pointing to a recent example at St. Catherine, he described getting through day-to-day and sometimes unexpected challenges serving as a pastor.

"After 71 years, the boiler blew on Ash Wednesday," he said.

He said a sense of humor goes a long way in facing such challenges, but pointed also to the support of brother priests as a source of strength.

"It's with your fraternity, your sense of humor, knowing who you are, helping me to know myself better, allows us to strengthen our relationship," he said.

Cardinal O'Malley said the men who accepted the honors "epitomize the wonderful, generous, and zealous priests" of the archdiocese.

He reflected on the Chrism Mass as a time to show and share fraternity.

"The Chrism Mass is always a moment for renewal and reflection, to recommit ourselves to the lord and to one another. I thank all of you for your presence here today, for the good example that you give to me, and to our seminarians, and our people. I assure of my prayers and affection, and ask all of you, especially during this Holy Week, to keep us, the diocese, in your prayers," the cardinal said.