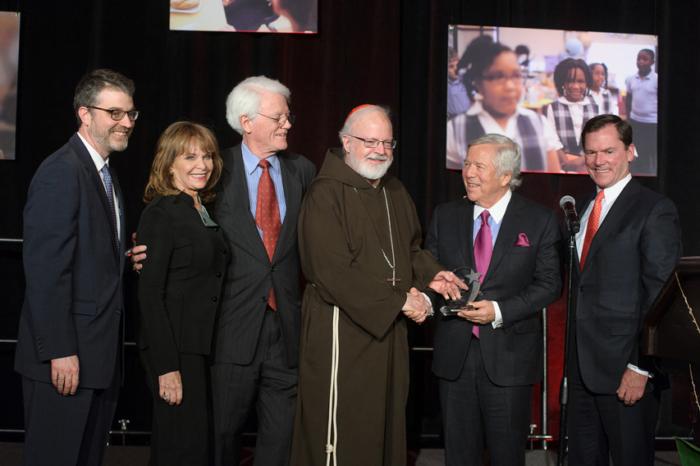 BOSTON -- Cardinal Seán P. O'Malley, Peter Lynch, chairman emeritus of the Catholic Schools Foundation Board of Trustees and Joseph (Jay) Hooley, ICSF Dinner Chairman, presented Robert Kraft with the Carolyn and Peter Lynch Award at the 24th Annual Inner-City Scholarship Fund (ICSF) Dinner Celebration on April 3 at the Copley Marriott. Kraft was honored with the award in recognition of his commitment and support of the Inner-City Scholarship Fund.

This year's dinner, chaired by Hooley, who is chairman, president and CEO of State Street Corporation, raised over $3.2 million for the Inner-City Scholarship Fund (ICSF). The ICSF is the signature program of the Catholic Schools Foundation (CSF), which distributes scholarships to students with demonstrated financial need attending Catholic schools in the Archdiocese of Boston. The annual event helps provide financial aid to as many as 5,000 students across grades K-12 in Boston's Catholic schools. CSF estimates it will award $6.5 million in scholarships, $1 million in program grants to schools and another $500,000 in donor-specified initiatives in the 2014-2015 school year.

The evening's student speaker remarks were delivered by Chaskiesha Figueroa, a senior at Central Catholic High School in Lawrence.

"With parents who never graduated from high school and growing up in the City of Lawrence, attending college did not seem to be a realistic dream; but because of your generosity, giving me the opportunity to attend Central Catholic High School, I stand before you ready to succeed in college next year," said Figueroa.

Next year's event will be chaired by Karen Kaplan, chairman and CEO of Hill Holliday.

The Catholic Schools Foundation provides scholarships and program support to over 80 Catholic schools within the Archdiocese of Boston. To learn more about the programs and services through CSF, visit www.csfboston.org.