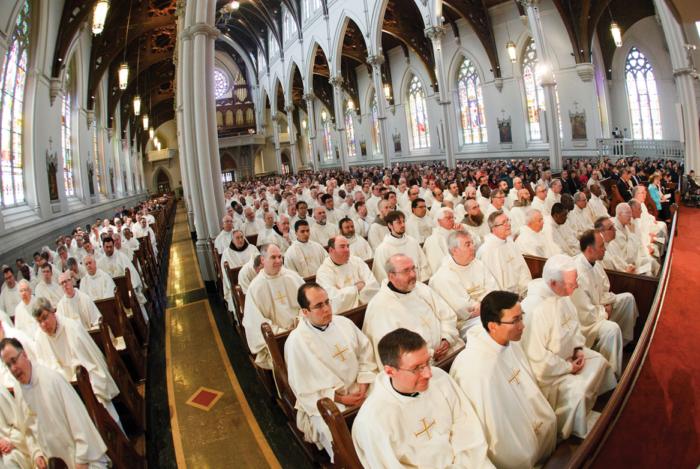 Hundreds of priests fill the pews of the Cathedral of the Holy Cross for the annual Chrism Mass, by tradition a day to celebrate priestly fraternity. Pilot photo/Gregory L. Tracy

SOUTH END ? The priests of the Archdiocese of Boston joined Cardinal Seán P. O'Malley at the Cathedral of the Holy Cross for the annual Chrism Mass, April 15.

The Chrism Mass serves as a symbol of unity in dioceses throughout the Catholic world as the local bishop, during Holy Week each year, blesses the sacred oils used to administer sacraments for the coming year ? the oil of catechumens, the oil of the infirm and the sacred chrism.

During the Mass, also seen as an opportunity to celebrate priestly fraternity, priests renewed their vows and gathered for a luncheon with Cardinal O'Malley afterward.

Keeping a tradition from recent years, the leader of the Boston Greek Orthodox Church, Metropolitan Methodios spoke to the priests and the cardinal as the Mass began, to honor the solidarity and fraternity of the priesthood ? a theme of the Chrism Mass ? between Greek Orthodox and Catholics in Boston.

"I pray together with you that this cathedral church ? and all churches of the Roman Catholic Church and the Orthodox Church ? be spiritually transformed into a Mount of Olives where Christians may come to pray that the will of God may soon lead us all to the unity that we all seek," Metropolitan Methodios said.

In his homily, Cardinal O'Malley emphasized the fraternity of priests, who will use the oils in their ministry of service to the Church for the rest of the liturgical year.

"If someone asks what the Chrism Mass means for us, we might say that it's a time when we gather for the annual oil change and tune up. The oils are the tools we use in the ministry we share, but just as important is our own tune up as we gather as presbyterate to recommit ourselves to follow Christ and to shepherd His people," the cardinal said.

He spoke about the ability of priestly ministry to transcend time as it renews faith and inspires future vocations.

"Your ministry will produce other ministers, other priests who will serve the next generation of Catholics. And their vocations will inspire the next generation. The way that we express our thanks for our faith and our priestly vocation is to pass these gifts on," the cardinal said.

He recalled that Pope Benedict XVI said the faith is spread not by proselytizing but by attraction.

"I believe that is true of our vocations as well. We felt a love for the priesthood because we saw the vocation embodied in a pastor, a curate, a teacher, a missionary. As young men we were not attracted because of great retirement benefits or insurance policies that provided hair transplants, cosmetic surgery and new dentures. No, we were attracted by the idealism and generosity of men who were good shepherds, who loved Christ and loved the people they served," the cardinal said.

"When I entered the seminary I was a nerdy kid, but I wanted to become a spiritual Rambo in the jungles of Papua New Guinea. Idealism and sacrifice are attractive to young men," he said.

He recalled a recent interview in which Pope Francis said he was attracted to the Jesuits by their missionary spirit, community and discipline. He reflected on the three traits for his priests in Boston.

He reminded the priests of Pope Francis' words in is Apostolic Exhortation "Evangelii Gaudium": "I dream of a missionary option, that is, a missionary impulse capable of transforming everything so that the Church's customs, ways of doing things, times and schedules, language and structures can be suitably channeled for the evangelization of today's world rather than for her self-preservation."

The cardinal said the archdiocese's pastoral plan Disciples in Mission and the emphasis it puts on evangelization expresses the "missionary option" in the Church in Boston.

"We all realize that business as usual is not going to do it. We must be a missionary Church right here in the Bay State," he said.

The cardinal said the pope points to the importance of parishes in that framework.

"He calls on us to review and renew our parishes to bring them near to people, to make them environments of living communion and participation, and to make them completely mission oriented," Cardinal O'Malley said.

The cardinal addressed the reflections of Pope Francis on the importance of community.

"The Holy Father is not referring to some epicurean group of similar individuals who come together for camaraderie and convenience. The community we need is one of brothers who come together around Christ and who share His vision, a community that is for the mission of Christ," he said.

The cardinal also pointed out practical means by which priests can work toward community.

"I never tire of encouraging our priests to join or form priestly support groups where men can come together to pray, to reflect on their own vocations and to share each other's lives as they work together to bring Christ to his flock," Cardinal O'Malley said.

Finally, the cardinal spoke about the need for discipline in the life of individual priests.

"Discipline is not easy. In some ways it gets harder as you grow older, but it is no less important. Certainly one of the greatest disciplines, as the young Bergoglio wisely perceived, is our use of time. The Holy Father often repeats that time is greater than space," the cardinal said.

The cardinal offered his own advice for his priests on the subject of discipline.

"I never tire of urging my priests to develop a rule of life, that will help assure a certain discipline in one's life, and to guarantee the time needed to cultivate a real friendship with the Lord in prayer," he said.

Even so, the cardinal said the lives of priests contain what he called "Simon the Cyrenean moments," inescapable moments forced on priests, like Christ's cross was forced on Simon by the Romans.

"We often find ourselves where Simon the Cyrenean was. Only a person with discipline in their life will have the freedom to respond. It is the discipline that we will attain only by having that personal rule of life that provides for prayer, spiritual reading, confession and priestly fraternity," he said.

Father John Cassani, a parochial vicar at St. Monica and St. Lucy in Methuen, was ordained in 2013 and received the Chrism Oils as a priest for the first time this year.

He shared his thoughts with The Pilot on bringing the sacraments to the community he now serves.

"It's going to be a great privilege of mine, in my first year as a priest, to celebrate the Easter Vigil and to be able to baptize and confirm someone, at the Easter Vigil this year," he said.

"It's just a way that the people that I serve can truly, really be connected to the whole Church. It's a wonderful thing. I am very excited about it," Father Cassani said.