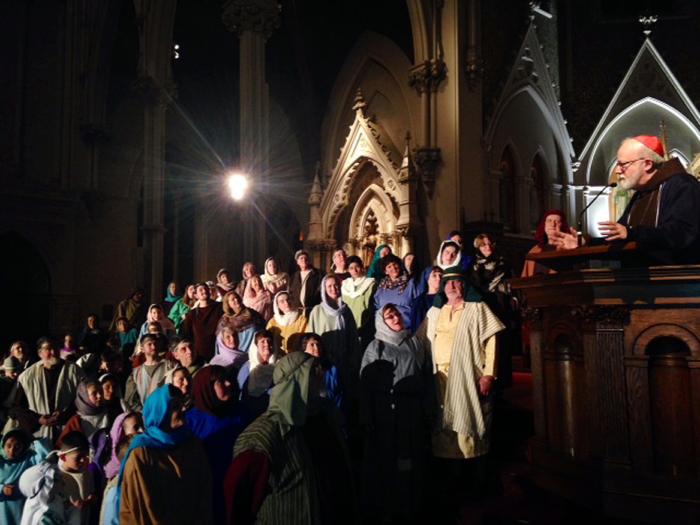 'That evening (3/29), I attended the musical presentation of the cantata "Resurrection" at the Cathedral the Holy Cross.' Pilot photo/CardinalSeansBlog.org

Last Thursday (3/27) I went to Worcester to attend their Adopt-a-Student Recognition Dinner. This year, they were marking the 25th anniversary of the program and I was asked to give the keynote address. It is their largest event to date. There was a special recognition for Bishop George Rueger, retired Auxiliary Bishop of Worcester, for his great support of Catholic education and they established an annual scholarship in his name.

Saturday (3/29), I went to the Diocese of Springfield to speak at their annual Catholic Men's Conference. In my address, I spoke to them a little about the new evangelization and about the anniversary of Pope Francis' pontificate and his apostolic exhortation "Evangelii Gaudium." They had over 400 men in attendance. I was very pleased to hear that they had their largest turnout so far. The men's conferences that are held in many dioceses are very important. The ones we have hosted in Boston have always had very good results and, very often, have resulted in parishes forming men's groups that continue the spirit of the conferences. I look forward to the day that we will once again have a men's conference in the archdiocese.

Cantata at the cathedral

That evening, I attended the musical presentation of the cantata "Resurrection" at the Cathedral the Holy Cross. It was performed by the St. Patrick's Family Players from Watertown and tells the story of St. Peter as he prepares for his martyrdom. In this moment of great difficulty and distress, he recalls his experience with Jesus and the other Apostles and the joy he received at the Resurrection and in being forgiven by Christ. They have about 100 singers in the group and quality of the performance was just amazing. The performance was the first of five shows they are doing in area churches on the weekends leading up to Holy Week.

Following the Mass in Arizona, I came immediately back to Boston because I wanted to be present for the Funeral Masses for our two fallen Boston firefighters. Father Dan Mahoney and Father Bob Casey, who serve as fire chaplains, celebrated the Masses and Father John Unni, whose church is just across from the firehouse, gave the homily at both Masses. We are all very grateful for these priests who give pastoral care to these firefighters because they have such a professional life that puts a great deal of pressure on their personal life and their families.

On Wednesday (4/2) we gathered for the funeral Mass of Lieutenant Edward Walsh at his home parish of St. Patrick in Watertown. He was from a family with many firefighters. Ed was married with three small children. In fact, one of his sons is getting ready for his First Communion. It was a very moving Mass. For those who have never been to a firefighter's funeral, particularly when they die in the line of duty, literally thousands of firemen come to support their fallen brother. At both Masses, they were standing at attention in front of the church for as far as the eye can see.

Thursday (4/3), there was the funeral Mass for Firefighter Michael Kennedy at Holy Name Church in West Roxbury. He was a young man, only 33 years old, who had served in the Marines and then as a fireman. At Lieutenant Walsh's funeral I told the people that Jesus says, "Greater love has no one than he who lays down his life for his friends" and that Pope John Paul II said that human fulfillment comes from giving the gift of our lives. This is what these men did.