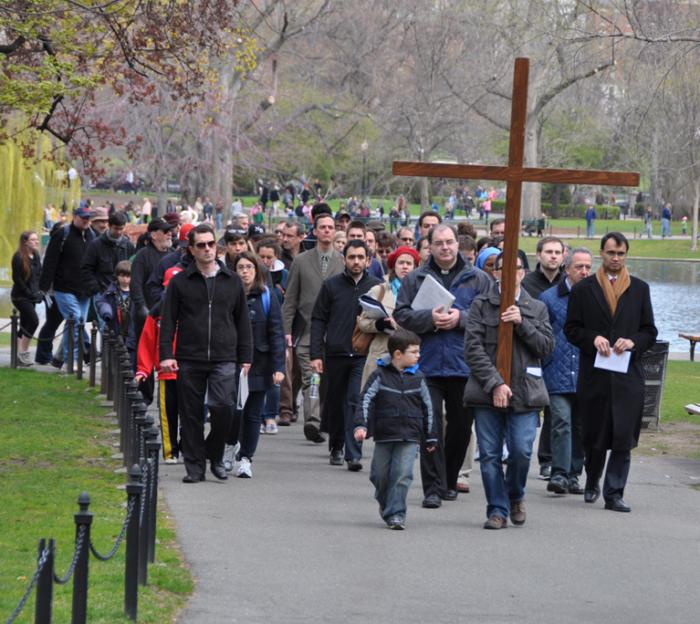 Participants walk through Boston Common during the 2011 Way of the Cross sponsored by Communion and Liberation. Courtesy photo

The Massachusetts branch of the Catholic international organization, Communion and Liberation, is sponsoring a two-mile Way of the Cross procession through the city of Boston April 18, to recall the passion and death of Jesus Christ remembered on Good Friday.

In 2013, 100 people attended the Way of the Cross in Boston. "Last year was my first time attending The Way of the Cross," said Michelle Huntley, a member of the local young adult Communion and Liberation group. "It was powerful to imagine walking with Christ on the way to Calvary through the familiar streets of Boston. I am looking forward to attending this year's Way of the Cross."

The Way of the Cross will include a capella choral music, prayer, scriptural reflections, and a special meeting with Cardinal Seán P. O'Malley at the Cathedral of the Holy Cross.

"It is such an honor to have Cardinal Seán join us," said Anujeet Sareen, one of the organizers of the event. "The Way of the Cross is an opportunity for us all to come together and remember the incredible event in human history that has given us true freedom--the death and resurrection of Christ."

Communion and Liberation is a lay ecclesial movement that Pope Benedict XVI has described as offering "a profound way of life that actualizes the Christian faith, both in total fidelity and communion with the Successor of Peter."

The Way of the Cross will take place at 10:00 a.m. on the Boston Common next to the Park Street T stop and will conclude at approximately 2:00 p.m. at the Cathedral of the Holy Cross.