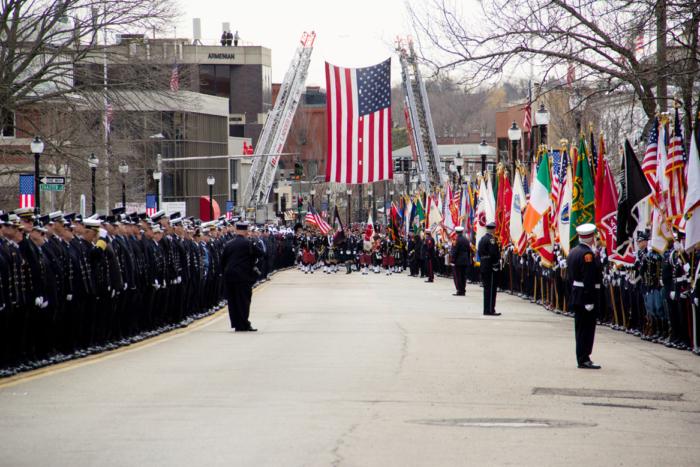 Firefighters line both sides of the street as the funeral procession for Lt. Edward Walsh makes its way to St. Patrick Church in Watertown. Pilot photo/Christopher S. Pineo

BOSTON -- For two consecutive days firefighters gathered from all around the world stood at attention to honor two of their fallen who died the week before fighting a nine-alarm fire in the Back Bay.

A spokesman for the Boston Fire Department said 10,000 firefighters lined the streets at the April 2 funeral Mass for Lieutenant Edward Walsh, 43, at his home parish of St. Patrick in Watertown and at the April 3 funeral Mass for Firefighter Michael Kennedy, 33, at Holy Name Church in West Roxbury. Engine 33 carried the casket to and from the church at each funeral, as it followed behind a flower-laden Ladder 15. Governor Deval Patrick, Mayor Marty Walsh, and other dignitaries also gathered to honor the fallen firefighter.

Walsh and Kennedy lost their lives in the line of duty when they became trapped in the basement of a four-story building, March 26, during a nine-alarm fire driven by heavy wind as it ripped through a Beacon Street brownstone building in Boston's Back Bay.

Boston firefighter chaplains Father Dan Mahoney and Father Bob Casey celebrated the Masses. Father John Unni, who serves at St. Cecilia Parish just across from the Boylston Street firehouse where the men were stationed, delivered the homily at both Masses.

"I'm just a representative today, maybe of the community, certainly of the Church, but I hope to be a conduit for the spirit, because I think it's the spirit, the Holy Spirit, that heals us and touches each of us on the deepest levels, especially when we need to be comforted, and strengthened, and healed," Father Unni said, at Walsh's funeral in Watertown.

Walsh's older sister Kathy Malone gave a tribute to her "little brother," but said "there was nothing little about him" especially in the way he lived his life. She described him as a loving family man who worked in finance before he followed the family tradition of firefighting.

"Eddie knew his stuff, and he was a born leader. You name it, Eddie probably did it," Malone said.

She said he served his community as an organizer and volunteer of many cookouts for children at the Franciscan Hospital for Children in Brighton and encouraged people in a sincere way as he "told it like it was" in dealings with family and friends.

"When you became friends with Eddie, whether as a kid or an adult, you had a friend for life. He took time for people," she said.

Cardinal Seán P. O'Malley presided in choir and spoke before the final commendation at both Masses.

The cardinal noted the sadness of the funeral in Watertown, but called the life that Walsh sacrificed, alongside Kennedy, a success.

"Our faith, our religion, is really about love. Jesus said no one has greater love than the one who lays down his life for his friends, and that word 'friends' includes a whole community. Many of us never had the joy and the privilege to know Ed up close, and yet we know that he was our friend," Cardinal O'Malley said.

"This is a man who made a gift of himself to his God, to his family, to his community. His life was a great success, and we are very grateful for it," he said.

The general president of the International Association of Fire Fighters Harold A. Schaitberger spoke at both funerals. He didn't know the men, but he shared details of the fire that killed them.

"Their actions gave other crews the time they needed to rescue a number of residents from the upper floors on the back side of the building. But the winds whipped off the Charles, gusting up to 50-miles-an-hour, pushed the flames and heat to unimaginable levels so quickly. Then, a powerful explosion and our two brothers were trapped. By then the entire structure was engulfed and compromised, and we lost them," Schaitberger said, at Walsh's funeral.

Speaking with reporters at Walsh's funeral, Boston Fire spokesman Steve MacDonald noted that Boston firefighters had traveled to Baltimore for the funeral of a firefighter in 2013. He called the tradition of traveling to honor fallen comrades of other departments a "brotherhood thing."

"Regardless of what department we're from, or what area we're from, it's just a steep tradition in the fire service that everybody is pretty much a brother or a sister, and they become second family," he said.

"It's just because of the brotherhood, sisterhood, of firefighting that that will always be," he said.

Thousands of the family of firefighters lined the streets again the next day at Kennedy's funeral in West Roxbury to honor the United States Marine combat veteran, Big Brother volunteer, and committed servant of his community and family.

Father Unni, in his homily, spoke about the need for people to support each other and move closer to Jesus Christ through prayer.

"Now is the time in the deepest losses for us to connect with Him. We don't have to have all the right words to say. We don't have to know all the words to the prayers, just a heart that is moving in that direction. I believe Mike Kennedy had that heart, implicitly, had that heart, and that's not saying he went to church every week. That's saying he had a heart that was connected with Jesus in the way that he did things," he said.

Mayor Walsh gave remarks at both funerals also. He honored Kennedy's courage, and the courage of all firefighters, as he spoke at Holy Name during the second funeral.

"He was a loyal and dedicated member of the Boston Fire Department. Like his colleagues at Engine 33, Ladder 15, on Boylston Street, he was one of the first on the scene of the Marathon bombing last year, and like many others in his company, he did not hesitate to tackle one of the worst fires in Boston's most recent history on Beacon Street last week. The loss of such a courageous, vibrant, compassionate man leaves a void in our communities that is impossible to fill," Walsh said.

Lt. Bill Jackson from Columbus, Ohio Division of Fire said he and comrades from his division packed in two cars and drove 13 hours to serve in Boston for the funerals, where they met firefighters from Australia, Canada and all over the United States.

"I have been on the honor guard for 20 years. I have travelled as far west as Colorado for line of duty deaths," he said, adding that honor guard members generally volunteer their service to support the families of the fallen.

"That's what we're here for is the families, but I have never seen an outpouring like we had yesterday," Jackson said.