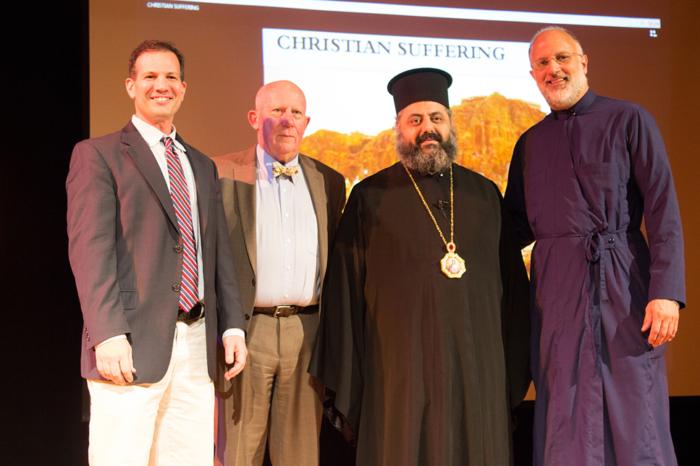 "Hello, Bishop? Would you mind picking up two prisoners, driving them alone behind enemy lines into a war zone, and completing a prisoner exchange for two kidnapped Christians?" This paraphrases part of the experience related by His Grace Bishop Elias Toumeh, Antiochian Orthodox bishop of Pyrgou in Syria, to an academic convocation March 28 in Brookline which was also an ecumenical gathering of Christians united in listening to his peoples' plight.

Hostage exchange is not even the most heartbreaking part of his ministry as a Syrian bishop. When his phone rings, he does not know if it is another request to come and collect the body of one of his flock. "In the last three years, I learned what it means to be a bishop. It is about being ready to be sacrificed at any moment for the people."

And his people were the centerpiece of the message, in my impression. The message Bishop Elias brought was Jesus, as witnessed in the life of the Christians of Syria. "We have no enemies. We carry no weapons." His church instead has become a relief center trying to cope with needs ranging from traumatic stress among children to hygiene supplies. They have built a Peace Center for Children -- children of many Christian and non-Christian backgrounds. "We teach them to care for each other."

A glance at the crowd listening to Bishop Elias told of the bond between Christians. "If one part of the body suffers..." (I Cor. 12:26) The gathering was the Costas Consultation of the Boston Theological Institute, a consortium of 10 theological schools and seminaries of Greater Boston. This year's host was Hellenic College/Holy Cross Greek Orthodox School of Theology. There was a large crowd, perhaps over 150, of Orthodox, Catholics, and Protestants. There were professors and students from Andover Newton Theological School, Boston College, Boston University School of Theology, and Gordon Conwell Theological Seminary. There were Evangelicals from Unite Boston and Emmanuel Gospel Center; there were mainline Protestants including the head of the Massachusetts Council of Churches; there were Catholics of several stripes including representatives of the lay ecclesial movement The Community of Sant'Egidio; and there were Orthodox of many Churches: Antiochian, Greek, and Romanian. Bishop Elias himself, like many Middle Eastern Christians, has a deep ecumenical background -- and a doctorate from Rome.

This diverse group came together in Christian solidarity around the suffering of the Syrian churches. We came first of all to listen and learn. When we Americans hear about Syria on the news it can seem an enigma to us. Most of us think it is a Muslim nation; few know it is historically composite, with a strong Christian presence. Even fewer of us realize how deep the Christian presence runs. Paul was converted to Christ in Syria. Christians were first called Christians in Syria. St. Peter was bishop of Antioch in Syria for seven years before he went to Rome. This is our family in the Triune God. They are precious members, giving witness at great cost. We were there to support them. Once again, as in the Christian Unity Martyrs' Prayer service of Jan. 25, one of the themes was "you are not forgotten."

Two bishops have already been kidnapped in Syria and are still missing after almost a year. Priests, Religious, and people of many traditions have been abducted. For all these centuries, Christians have kept the faith, literally, in Syria. Except now, Syria has not kept the Christians. Bishop Toumeh described a Syria which held approximately 2 million Christians three years ago. Now he believes approximately one-third have emigrated, one-third are displaced within Syria, and one-third are left in their homes. He compares their situation to that of the Churches in Iraq. And Syria as a country, he says, is losing a generation. Children have put aside toys and have ordinance collections.

It is not a problem for one Church only, but for all Christians. Subsequent to Bishop Toumeh's address, news came out that Kessab, Syria, the last Armenian town in the Mediterranean region to survive the 1915 genocide, has been the subject of attacks from Islamic rebels. The result of all of this adversity is the need and desire for deeper Christian unity. As the Holy Father has said, we are living in the age of "the ecumenism of blood."

Bishop Toumeh said the first need is to stop the violence and begin a political process, then bring in humanitarian aid. After that, economic growth is the key to providing jobs to prevent emigration and thereby save the Christian presence in Syria. At that point, he said, Christians can reclaim the confidence of their historic leadership role in concert with the other parts of Syrian society in the land of their ancient heritage.

Vito Nicastro, PhD. is associate director of the Office for Ecumenical and Interreligious Affairs of the Archdiocese of Boston.