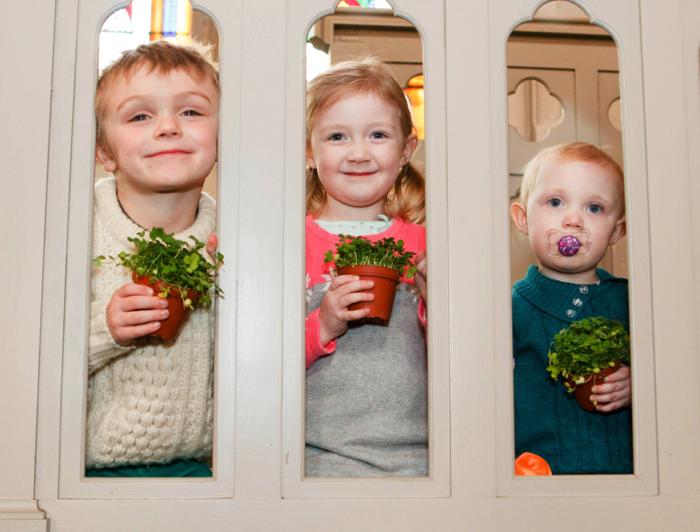 Friends Gerard Barilleaux of Somerville and Sofia and Emilia Valenzuela of Cambridge hold their pots of shamrocks that were blessed by Cardinal O'Malley during the St. Patrick's Day Mass at the Cathedral of the Holy Cross. Pilot photo/Gregory L. Tracy

SOUTH END -- As he celebrated Mass for the Feast of St. Patrick at the Cathedral of the Holy Cross, March 17, Cardinal Seán P. O'Malley presented the saint as a victim of human trafficking.

The cardinal compared the story of the saint, a 16-year-old son of a Roman living in what is now Great Britain abducted by Irish pirates and sold into slavery, to the story presented in the Academy Award winning "12 Years a Slave" in his homily.

"It's based on the history of a born-free African American who is kidnapped in Washington, D.C. in 1841 and sold into slavery. Unfortunately, human trafficking is still a cause of untold suffering even in today's world, where laws against it are taken for granted. Today we are gathered to cherish the memory of a young man who was a victim of human trafficking and slavery," Cardinal O'Malley said.

The cardinal also described St. Patrick as a social activist of sorts.

"According to scholars, Patrick was the very first person in history to denounce the institution of slavery. In the ancient world, and even into the 19th century, slavery was widely accepted as a valid institution, a necessary evil. So, Patrick's denunciation of slavery, based on his own experience and his reading of the Gospel, is a most significant step forward in human history," Cardinal O'Malley said.

Cardinal O'Malley said St. Patrick grew in faith as he lived as a slave for six years in Ireland, after his abduction.

"It's one of those examples in history where God brings something good out of something evil. In the suffering of Patrick, he turned to God. He had been a lukewarm, cultural Catholic at best. His captivity helped Patrick to discover God's grace. For Patrick, it was like finding the pearl of great price, or that treasure buried in the field," the cardinal said.

After his escape from slavery, St. Patrick felt a calling to return to Ireland in order to spread the good news of the Gospel and became an early Christian advocate against slavery in his lifetime.

"His family was so pleased to have him back. I'm sure they were shocked when he announced that he was going to return to Ireland," he said.

Before he blessed shamrocks for people to take after the Mass, the cardinal pointed to the faith of St. Patrick and his work reaching out to the Irish as a worthy example for Catholics to strive toward today.

"Our task as sons of Patrick and daughters of Patrick, is to make a better world where the love of God and neighbor brighten the landscape and point us to our eternal homeland, where like Patrick we live the life of the resurrection in the presence of the triune God. The shamrock is our symbol and reminder of Patrick's preaching to our ancestors. Now it's our turn to be messengers of the Gospel of joy," he said.

The cardinal referenced a call by Pope Francis to reach out to people living on the periphery, and said the Irish -- and all who follow the example of St. Patrick -- should prioritize work toward the elimination of world hunger and starvation.

"The Irish were living on the rim of Europe, but Patrick found us. We have to seek those on the periphery," he said.

Guests of honor in attendance at the Mass included former Mayor of Boston and ambassador to the Vatican Ray Flynn, Consul General of Ireland Breandan O Caollai, and Boston Police Commissioner William Evans -- who attended the Mass alongside BPD officers and leadership.

The commissioner told The Pilot afterward why he felt it important to come out and celebrate St. Patrick's Day with the Mass at the cathedral.

"It's important to celebrate St. Patrick's Day, the patron saint of the city, and we're thankful for everything we have, our family, our community, and we always are looking for God's blessing to make our job a lot easier," Evans said.

Superintendent-in-Chief William G. Gross said he appreciated being invited to the cathedral for St. Patrick's Day.

"It was great to be invited here by the cardinal. That is the first personal letter I have ever received from a cardinal. It just shows what this city is about," Gross said.

He also noted his appreciation for the message the cardinal gave.

"It was a great history lesson he gave about St. Patrick as well, he being a slave, and how he compared that to the plights of many, many African Americans in this country. It shows that you can go from slavery to greatness. From a great man like the cardinal to bring that to light, I am going to pass that on just like St. Patrick passed on his teachings," he said.

He and the commissioner said human trafficking is always a concern of the BPD, and Gross said the cardinal's message of caring for people on the periphery of society hit home.

Consul General O Caollai said the cardinal touched on a commitment all Catholics should recognize as they try to live their faith.

"If we say we're Christians, we should be looking for what that practically means to us, and I think the cardinal very clearly set out a path for those of us that claim to be Christians and Catholics," he said.

Flynn said that although other Boston events celebrate St. Patrick's Day, the Mass at the Cathedral of the Holy Cross stands out.