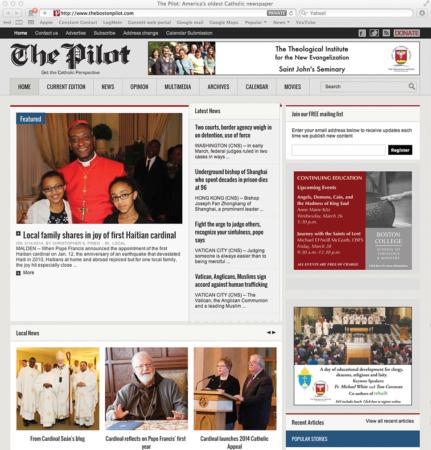 BRAINTREE -- The Pilot marked the Feast of St. Joseph, patron of the Universal Church, by launching its newly redesigned website with the aim of better bringing the news of the Church to the world.

The Pilot launched its redesigned site, www.TheBostonPilot.com, March 19. It was the first major overhaul since 2007.

Editor Antonio Enrique said the central thrust of The Pilot remains steady as the features available to online readers change.

"Our goal is to bring the Catholic perspective on the news to our readership. Historically, that readership meant the newspaper. As we move into the future, it's not the future, it's the present; the way the news is communicated is no longer tied to a particular medium," Enrique said.

With the overhaul, the newspaper updated more than just their web presence as accessed by personal computers; it also allowed the website to integrate the appearance of content between computers and other platforms -- including tablets and mobile phones.

Managing editor Gregory Tracy explained that one of the key features of the new site is that it is "responsive," meaning that it reorders and resizes content to fit any size screen -- from an HDTV to a mobile phone.

In the past, to deal with differing screen sizes, many sites offered a full "desktop" version and a stripped down, mainly text "mobile" version for smaller screens. In a responsive website, all the content of the full website is available on any size device. The new site also eliminated use of Adobe Flash for graphics and multimedia for better compatibility with mobile browsers.

Another addition to the site, the editors said, is that for the first time readers will be able to comment on stories on the newspaper's webpage. However, they said that in order to keep dialog "civil," they decided not to allow anonymous comments. Instead, readers will be required to be logged into their Facebook accounts if they want to leave feedback on a story.

The log-in "attaches a real name and a real identity to the comments," Tracy said. "Experience from other websites has shown it raises the level of dialogue and tends to deter people from just launching invectives at others, or trolling, or insulting others," he added.

Facebook was chosen because of its wide adoption but The Pilot is also looking at integrating other social media log-ins for the comments section, they said.

When The Pilot launched the previous version of its website in 2007, it received top prize for best website from the Catholic Press Association of the United States and Canada. The site also received recognition in the same category in 2008 and 2009.

The website was updated in 2010 to incorporate social media and technical improvements, but did not make major changes to the appearance of the site.

"Since then, we have been incorporating other elements that were not initially there, but it has gotten to the point where we wanted to give a new feel and look to the website, and incorporate some new features," Enrique said.

Tracy said the website seeks to integrate the new features with a focus on visual presentation, while avoiding looking busy, and maintaining a look consistent with the history of The Pilot.

"Ultimately, what we tried to do was come up with a design that was visually appealing and interesting, but at the same time dignified. It is a balance, because we're talking about a newspaper with 180 years of history," Tracy said.

Enrique said the redesign had been under consideration for about a year but that that project had only been begun in mid-February. The Pilot developed the website entirely in-house and Enrique pointed to collaboration by The Pilot staff in getting the overhauled website ready for launch.