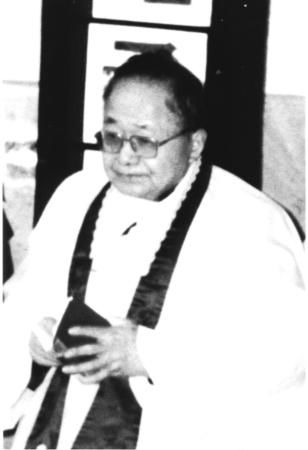 Bishop Joseph Fan Zhongliang, 96, appointed as bishop of the underground Catholic Church in Shanghai in 2000, died March 16 after a brief illness. He was placed under house arrest soon after his appointment and earlier served 20 years in prison following his arrest during a 1955 government crackdown. (CNS photo/ Cardinal Kung Foundation)

HONG KONG (CNS) -- Bishop Joseph Fan Zhongliang of Shanghai, a prominent leader of China's underground Catholic Community, died after a brief illness March 16 at his home. He was 96.

Bishop Fan, like many other Catholic leaders, served in prison after he and other priests were arrested in 1955 during a government crackdown. From 1958 to 1978, Bishop Fan was imprisoned in Qinghai province, where his job was to carry corpses in a cemetery, reported the Asian church news portal ucanews.com.

China's estimated 10 million-12 million Catholics are divided between two communities: one that, for decades, remained underground because it did not accept compromises and political control after the Chinese communist takeover in the 1950s, and one that the Vatican has acknowledged accepted some compromises and political control in order to continue its existence. Both are faithful to the pope, and both have faced persecution from Chinese authorities.

Anthony Lam Sui-ki, senior researcher at the Holy Spirit Study Center in Hong Kong, said young priests, even those from the so-called open church community, often met with Bishop Fan before they were ordained. Shanghai has lost a "steadfast and persevering" leader in Bishop Fan, he said.

A Jesuit, Bishop Fan was ordained a priest in 1951. He refused to recognize the Chinese government-controlled Catholic Patriotic Association when it was established.

However, the late Bishop Aloysius Jin Luxian of Shanghai, another Jesuit who spent 18 years in prison during the communist repression, was recognized by the government as bishop of Shanghai in 1989. He did not reconcile his status with the Vatican until early in the 21st century, according to information on the diocesan website.

After his release from prison, Bishop Fan became a teacher. Later he was allowed to return to Shanghai.

Funeral arrangements were not finalized as of March 16 but will be limited to two days as outlined under Chinese law.

Lam told ucanews.com that bishops of the underground church likely will meet to suggest a successor to Pope Francis.

Meanwhile, the future of Shanghai Bishop Thaddeus Ma Daqin, who was ordained in 2012 with the approval of both Pope Benedict XVI and the Chinese government, remains uncertain. Bishop Ma said during his ordination Mass that he would no longer hold any position in the Catholic Patriot Association so that he could focus on pastoral work and evangelization. He was immediately placed under house arrest at Sheshan Seminary. The government also rescinded his appointment.