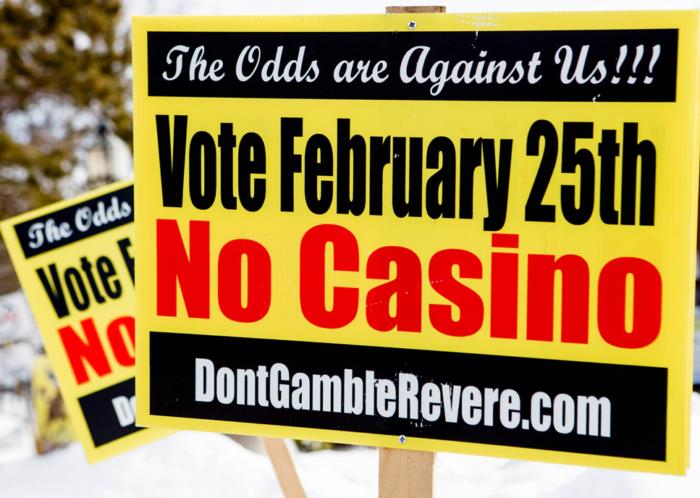 Signs by the group Don't Gamble on Revere urge a no vote on the city's Feb 25. casino referendum. Pilot file photo/Gregory L. Tracy

For a second time, voters in Revere have overwhelmingly approved a proposed casino in their city. Voters approved the proposal for a $1.3 billion resort casino built by Mohegan Sun on Suffolk Downs' Revere property nearly two to one, 63 percent in favor to 37 percent opposed, in a Feb. 25 special referendum.

The host community agreement approved by voters calls for Mohegan Sun to make a $33 million upfront payment to the city followed by annual payments of at least $25 million if the Revere location is selected by Massachusetts Gaming Commission for eastern Massachusetts's sole casino license.

This week's vote on a Revere-only casino came about after East Boston voters turned down a proposal last November that would have sited the casino on Suffolk Downs' property that straddled the Revere/East Boston city lines. According to the law allowing for resort casinos in the state, that proposal was required to be approved by voters in both cities. On Nov. 5 voters in East Boston turned down the project 56 to 44 percent, while voters in Revere accepted the project 61 to 39 percent, effectively killing the original plan.

Revere officials, including Mayor Dan Rizzo, have touted the casino proposal as a source of jobs and revenue. Opponents, including the leaders of many of Revere's faith communities, have said the increases in crime, traffic and gambling addiction will outweigh any possible benefits.

According to the Associated Press, by early February a pro-casino advocacy committee had received $400,000 from Mohegan Sun to urge passage of the referendum. In contrast, the anti-casino committee Don't Gamble on Revere had raised just over $11,000 by the same time.

"Gambling is destructive -- not just of individuals but of families and of communities. It's short-term gain, long-term pain," Father George Szal, pastor of Immaculate Conception Parish in Revere, said at a Feb. 3 press conference held by local faith leaders to oppose the casino.

"(Casinos) don't produce anything...One person may come out with a pocket full of money, but it's at the expense of all those who have lost millions," Father Szal said. "Predatory gambling is immoral."

Having received the approval of voters, the Revere proposal now must compete for the sole Boston-area casino license with a proposal from Wynn Resorts for a proposed $1.6 billion resort casino in nearby Everett. The state gaming commission is expected to announce its decision before the summer.

Meanwhile, in the wake of the Revere vote, the anti-casino group Repeal the Casino Deal has reaffirmed its intention to put a ballot question before voters this November that would ban casino gambling in Massachusetts.