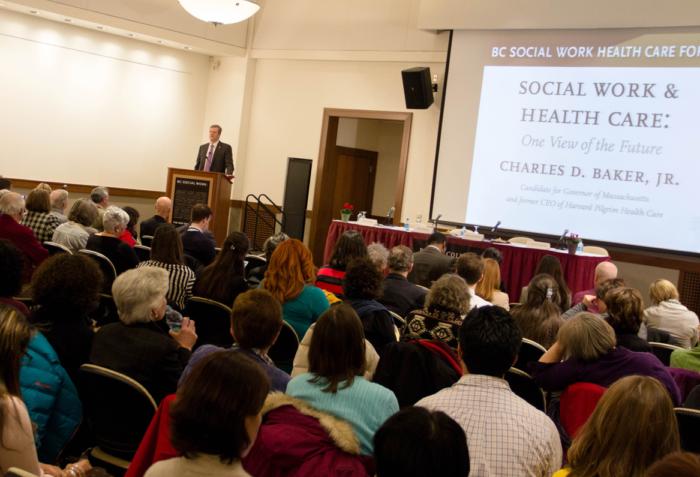 He gave his thoughts on the new law during his keynote address at a forum sponsored by the Boston College Graduate School of Social Work, "Health Care Reform: From Policy to Practice" before a panel discussion with healthcare experts and social workers.

Baker said the new healthcare law will kick in simultaneously with other policy changes in a way that will make the work of social workers and healthcare providers much more complicated.

"The ACA, Obamacare, whatever you want to call it, has about a million moving parts, and people will be trying to figure out what those moving parts mean for a long time," Baker said.

He referenced a conversation he had earlier with the chair of the school's Health and Mental Health Concentration Marylou Sudders, in explaining that he doesn't see the law providing a clear framework for implementation of changes.

"In fact, I was talking to Marylou earlier about this and she referred to the federal legislation as a blueprint, and I said actually I think it's more like a napkin on which somebody has drawn a sort of an outline," he said.

He said the changes will impact mostly people in the healthcare field who are involved in direct care to patients. He said healthcare would tend less toward employer-sponsored or large-scale plans, and more toward custom-made plans focused more on individual needs.

Overall, he said, the changes created by the ACA break down into three categories: the expansion of coverage, the creation of the so-called healthcare exchanges, and cuts in the Medicare program.

He said all three would impact states throughout the country, but Medicare cuts would have a particular impact in Massachusetts because of the state of coverage that existed before the ACA became law.

"Massachusetts was already covering 97-98 percent of its population, so there is no upside to us associated with more people being covered. People will be covered differently, but the idea that more people are going to be covered, not so much. So, what's going to happen here is that there's no offset against the Medicare cuts. Our provider community is just going to have to eat the Medicare cuts with no offset improvement in reimbursement anywhere," he said.

He said he anticipates destabilizing issues for providers.

One complicating element he pointed to that will change the landscape of healthcare comes in the form of the International Classification of Diseases, 10th Edition -- which he said will not be easy to implement and will expand the system used to report medical diagnoses and inpatient procedures.

He said the new system's implementation had been delayed because it looked difficult to implement for providers and those paying for healthcare.

"If some of the folks who are in the administrative side of healthcare, that you are working with, seem to be particularly harried over the course of the next couple of years, believe me, they ought to be, because this is all going to be for many of them a significant period in which they are going to be expected to absorb a lot of changes in the way the system operates, the way the system keeps track of information, the way the system keeps track of data -- not just clinical data but administrative data, the processes that they use to manage and collect data and information, and the way they get paid," Baker said.