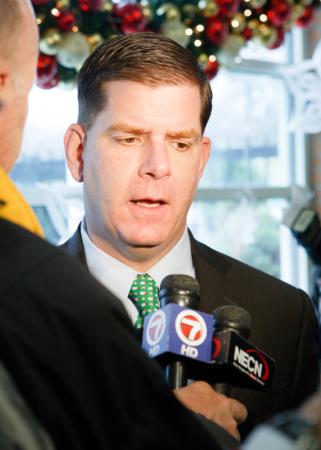 Walsh has asked the Cardinal Seán P. O'Malley, to hand-deliver an invitation to the pontiff asking him to visit the city during a possible trip to the U.S. next year.

Cardinal O'Malley, considered the pope's closest North American adviser, was in Rome this week for a meeting of the council of eight cardinals advising the pope on Church governance reform and other matters.

"The city of Boston has always been known as a city of profound faith: faith that its diversity makes it strong; faith in doing the right and appropriate thing for its poor; and faith in the power of truth and justice," the mayor wrote.

The only time a pope has visited Boston was 1979, when Pope John Paul II held a Mass for thousands on Boston Common during a downpour.

Walsh, a sixth-grader at the time, remembers decorating St. Margaret School and standing on the steps as the pope's motorcade wound through the city. He still has a small Vatican flag from that day.

Cardinal O'Malley has previously expressed doubt about the likelihood of a papal visit to Boston.

Father Federico Lombardi, the Vatican's spokesman, said in an email that the pope always receives invitations "with attention and gratitude," but that "the decision to travel to a certain place is another thing, and it is too early now for me to speak of a concrete project of a visit of the pope in the USA."