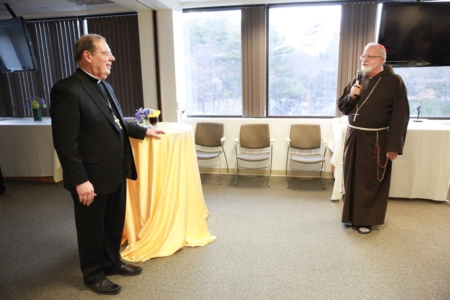 'Wednesday (1/29), we had a Mass and gathering of the Pastoral Center staff to say farewell to our Vicar General, Bishop Robert Deeley, who is becoming the Bishop of Portland, Maine.' Pilot photo/CardinalSeansBlog.org

As I have mentioned previously, I have been meeting with all of our seminarians by class, because now that there are so many, I want to be able to meet with them in smaller groups. So, on Friday (1/24), I met with our 13 seminarians in second theology. Father Robert McCreary and Father Dan Hennessey also joined us for Vespers and dinner at the cathedral. I always look forward to these opportunities to get to know the seminarians better and to have a conversation with them about their experience of the seminary and the life of the Church.

Sunday (1/26), I went to Plymouth to dedicate the new St. Bonaventure Church. The former church was lovely, but was just too small. They have had so much growth in the parish, they just could not fit in the old church -- which is a good problem to have.

It is a beautiful structure. With all the ceremonies for blessing and dedicating the new church the Mass lasted about 2-and-a-half hours. It was a very beautiful ceremony. Father Ken Overbeck has done an extraordinary job bringing this all together. He was assisted in the design of the church by the different committees in his parish and also by Tom Ryan, who is a very fine liturgist. The final result was a new church that is just stunning... The parish is blessed to have a large plot of land, and so they were able to retain the old church building. The former church will now be used as a parish hall and they constructed a glass connector between the two buildings.

Talk at the New England Council

Wednesday morning (1/29), I was invited to give a talk at the New England Council, a group of local businessmen and civic leaders. We gathered at The Hampshire House, which many will remember as the setting of the TV series "Cheers." Jim Brett is the president and CEO of the New England Council and John Hailer is the chairman of the board. I spoke to them about the work of the archdiocese and the Church and then took questions from the audience for about half an hour.

Wednesday (1/29), we had a Mass and gathering of the Pastoral Center staff to say farewell to our Vicar General, Bishop Robert Deeley, who is becoming the Bishop of Portland, Maine. At the reception we presented him with a gift of a set of vestments with his coat of arms. We expressed our gratitude for the wonderful service that Bishop Deeley has provided to the archdiocese through his service as a parish priest, at the tribunal, in Rome and, of course, as Vicar General of the archdiocese. While this Mass was for the staff of the Pastoral Center, there will also be a public Mass of Thanksgiving for Bishop Deeley at the Cathedral on February 9 at 2 p.m. We will gather there with people from throughout the archdiocese to thank him for his service to the archdiocese and wish him well as he begins this new ministry entrusted to him by the Holy Father.