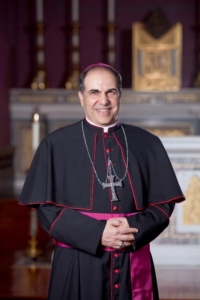 Cardinal Seán P. O'Malley announced Feb. 3 that he has named the Most Rev. Peter J. Uglietto, as Vicar General and Moderator of the Curia for the Archdiocese of Boston.

BRAINTREE, MA -- Cardinal Seán P. O'Malley announced Feb. 3 that he has named the Most Rev. Peter J. Uglietto, as Vicar General and Moderator of the Curia for the Archdiocese of Boston. The appointment is effective March 6, 2014. Bishop Uglietto succeeds the Most Rev. Robert P. Deeley, Bishop-designate of Portland, Maine.

Cardinal Seán said, "We are grateful that Bishop Uglietto has accepted this call to leadership in the Archdiocese. He has earned the respect of our priests, deacons, religious and laity through attentive pastoral care and concern for the people we serve. As the Archdiocese moves forward with pastoral planning through Disciples in Mission, the Bishop's understanding of the needs of our local communities will be of great assistance. We ask the Lord to bless Bishop Uglietto as he assumes these new responsibilities."

Bishop Uglietto said, "I am honored and blessed to have the opportunity to serve Cardinal Seán and the Archdiocese in this assignment. The vibrant presence of the good works of mercy taking place across the Archdiocese exists at the parish level, in our schools and in our ministries. I have witnessed wonderful acts of kindness and charity in my years as a priest and most recently as Bishop of the North Region. In my new role, I will be committed to being of service to our priests, deacons, religious and laity as together we embrace the work ahead. Please pray for me that I am able to serve the Archdiocese well with Jesus ever at my side."

Since 2010, Bishop Uglietto has served as Auxiliary Bishop of the North Region for the Archdiocese. Prior to his Episcopal Ordination he was the Rector and President of Blessed John XXIII National Seminary, Weston, MA for five years. Bishop Uglietto also served as Academic Dean and Director of Field Education and as a Professor of Moral Theology at Blessed John Seminary. Bishop Uglietto was ordained a priest of the Archdiocese of Boston in 1977. His parish assignments have included St. Francis Xavier Church in Weymouth, St. Gregory Church in Dorchester, and St. Margaret of Scotland in Dorchester (1977-1988).

He was a retreat speaker for the Spiritual Development Office (1979 -1988) and Adjunct Spiritual Director at St. John Seminary (1985-1988). For two years (1986-1988) he served as Coordinator of Spiritual Directors and Retreats with the Archdiocese Permanent Diaconate Program and for three years (1990-1993) Campus Minister at Regis College in Weston. He earned his Doctor of Sacred Theology (S.T.D.) and Licentiate in Sacred Theology (S.T.L.) from Pontifical Lateran University, Rome at the American Campus of the John Paul II Institute For Studies in Marriage and Family, Washington, D.C. He holds a Master of Christian Spirituality (M.Ch.Sp.) from Creighton University, Omaha NE and a Master of Divinity (M.Div.) from Saint John Seminary He received his Bachelor of Arts from Boston College in 1973 and is a graduate of Boston College High School and the Boston Archdiocesan Choir School.

Planning for the leadership of the North Region of the Archdiocese will be finalized in the coming weeks and announced at that time.