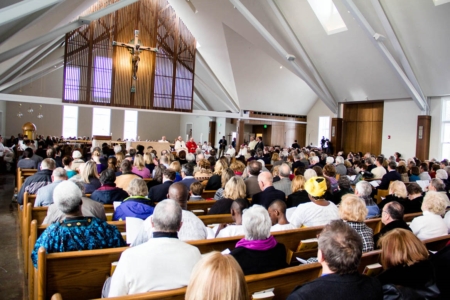 PLYMOUTH -- A capacity crowd filled pews in Plymouth Jan. 26 as Cardinal Seán P. O'Malley presided over a rite to dedicate the newest church in the Archdiocese of Boston, at St. Bonaventure Church located in the town's Manomet section.

Under the current pastor, Father Kenneth C. Overbeck, the parish expanded in recent years beyond the capacity of the previous church building. The parish has 10,000 registered parishioners, from 3,000 households, sending 800 students to religious education programs.

"It is truly a great tribute to your faith and your dedication that we are able to be here today to dedicate this wonderful church," Cardinal O'Malley said during his homily.

Before the cardinal began the Mass, he and the pastor signed three copies of a Record of Dedication with representatives of the parish. The document recorded the date, the name of the bishop celebrating the rite, and the name of St. Bonaventure -- a relic of whom the cardinal placed beneath the altar during the dedication.

"In the early Church at a time of persecution, Mass was celebrated on the tombs of the martyrs and that's why we have the custom of putting relics in the altar. We are the descendants of those martyrs. We, like them, are called to give a witness to our faith," Cardinal O'Malley said.

As the ceremony began, general contractor Allen Whitaker, architect Treff LaFleche, and advisor on liturgy and sacred art G. Thomas Ryan presented elements of the construction and artwork to the cardinal for their symbolic value. The rock for the altar, they said, came from a Massachusetts quarry inspired by the Native American historical site Sacrifice Rock and Plymouth Rock, both located in Plymouth.

"In the Scriptures there are 450 references to altars. The Jewish celebration each year of Hanukah is the feast of the rededication of the temple in Jerusalem and the altar there. Today is our Hanukah celebration here, as we dedicate this altar. For us of the new covenant, the altar is our family table. I like to think of it as a leaf from the table of the upper room where Jesus celebrated the Last Supper, because here gathered at this altar the Lord is working that same miracle for all of us, to feed us with his Body and his Blood," the cardinal said.

During the dedication rite, Cardinal O'Malley placed the relic under the altar, which was then sealed in place. Then the cardinal anointed the altar with chrism, and priests anointed twelve stones affixed to the walls of the church, before the cardinal brought the Blessed Sacrament in procession to the tabernacle for the first time as the Mass concluded.

The dedication marked the conclusion of a two year process begun when South Region Bishop John A. Dooher blessed the site of the new church in 2012. Father Overbeck presided over the Rite of Laying the Foundation and sealed a parish time capsule in July 2013.

When asked about the meaning of the dedication for the parish, Father Overbeck laid out his thoughts on the new church building in relation to the community it serves.

"It is a great day. Meaning is a tough question, but we have been working for this. We need it. We are a growing community. People were standing in the back. I think for evangelization, we can now really welcome people in. They got a seat to sit down in, and we've got the facilities ... to do the work for the Lord," he said.

Father Overbeck said the chapel in the church would be named St. Catherine Chapel to honor a previously closed parish and attempt to preserve an element of the Catholic history of the community.

The new building followed a Cruciform architectural plan, and parish officials said the construction project took about 18 months to complete at a cost of $7.96 million. The parish has raised to date $4,043,588 from 779 donors, according to the parish.

Pablo Eduardo, a Gloucester resident, sculpted the crucifix above the altar to depict Jesus Christ in his suffering before the spear pierced his side.

"If you look closely, it does not have the spear wound in the side of Christ, because this is Christ at the moment of death, 'Father into your hands I commend my spirit. It is finished.' And so, it is the living Christ," he said.

Father Overbeck said he was struck by the face on the image of Christ on the new crucifix.

"It's a face that says, 'Tell me your troubles.' It's beautiful," he said.

Father Overbeck said the architecture followed a theological tone set by St. Bonaventure, a Franciscan who became a cardinal like Cardinal O'Malley, with an open-space floor plan and large windows to light the parish.

"The outside decorates the inside, so that all of kind of nature is drawn into worship with us," he said.

Ed Dutton, a parishioner since 1979 with his wife Eleanor, said the new church continues a blessing he sensed when the day he first walked into the former church.

"The old church meant a lot, but I am looking at this one as it is a new beginning with even more blessings to be bestowed upon us," he said.

The leader of the local Knights of Columbus council told The Pilot that the community and the people involved with the project put in a great deal of hard work.

Grand Knight of St. Bonaventure Knights of Columbus Michael Gaffey said, "It has been interesting to see it bit-by-bit, piece-by-piece come together. It was particularly striking today how in a very real sense it felt like a spare and empty building when we walked into it, and as the ceremony and the Mass went along, as the candles were lit, as the altar was anointed, as the room was incensed, how it came to feel more and more like a church, until suddenly at the end it really, truly was."