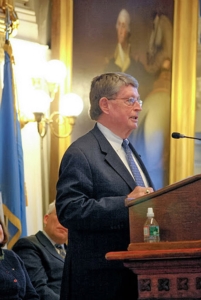 BOSTON -- A local lawyer who helped craft the challenge to Massachusetts 35-foot buffer zone law heard before the United States Supreme Court on Jan. 15, said he is "cautiously optimistic" that the law will be overturned.

"The consensus is that the case will be reversed," Phil Moran told those gathered at the Massachusetts Citizens for Life (MCFL) Assembly for Life on Jan. 26. "To say that it was exciting to be there for the historic case would be an understatement."

The law, enacted in 2007, criminalized pro-life speech within 35 feet of an entrance, exit or driveway of an abortion clinic. It prevents people from approaching women contemplating abortion in order to provide them with support, information and practical assistance, Moran said.

"The petitioners try to position themselves near the clinics in an attempt to reach this unique audience at a unique moment," he said.

These peaceful counselors are banned even from beginning conversations with willing listeners. The law exempts people representing the clinic, which results in "viewpoint discrimination," he said.

Lower courts disagreed, saying that petitioners had ample alternative avenues of communication, even suggesting that they could use a bullhorn. Much of the reasoning for the rulings in McCullen v. Coakley was based on a prior case, Hill vs. Colorado, in which the U.S. Supreme Court upheld an eight-foot buffer zone around people entering health care facilities in Colorado.

Moran spoke about the events at the Supreme Court on Jan. 15, breaking down the most important moments of the oral arguments that fill a 62-page transcript.

Mark Rienzi, lawyer and assistant professor at The Catholic University of America, began arguments in favor of overturning the law by stating that public sidewalks are a "natural and proper place for citizens to exchange information and ideas." Any disturbances outside clinics should be dealt with appropriately without discriminating against everyone's First Amendment rights, he said.

He added that the Commonwealth has not prosecuted a person for obstruction outside an abortion clinic since 1997.

Almost immediately after Miller began her oral arguments, Scalia leaned in and said, "This is not a protest case. These people do not want to protest abortion. They want to talk to the women who are about to get abortions and try to talk them out of it."

"If it were a protest case, keeping them back 35 feet might not be so bad. They can scream and yell and hold up signs from 35 feet," he added.

Miller maintained that the counselors had plenty of opportunity to speak with women before they entered the buffer zone and that conversations had been moved back only "a few feet."

Justice Elena Kagan objected, saying that a 35-foot zone is more than a few feet.

"It's pretty much this courtroom, and that's a lot of space," she said. "I am having problems with this statute. I guess I'm a little bit hung up on why you need so much space."

At another point Miller claimed that, "No one is guaranteed any specific form of communication."

Justice Anthony Kennedy responded, "Do you want me to write an opinion and say there is no free speech right to quietly converse on an issue of public importance?"

Justice Samuel Alito pointed out that if someone working for the center approached a woman in the buffer zone and said, "Good morning, this is a safe facility," that would not violate the law but another person approaching the same woman who said, "Good morning, this is not a safe facility," would be a criminal. He asked how such a law could be considered viewpoint neutral.

Miller answered that in the first case, the person was doing his or her job.

"Justice Alito was not persuaded," Moran said. "Nor was anyone else, I suspect."

Alice Bachant of Stoughton told The Pilot she was "inspired" by Moran's summary of the events. Bachant is chair of the Respect Life Committee at her home parish, Immaculate Conception, and used to do sidewalk counseling before the latest buffer zone was put in place.

"It gave me a lot of hope that something positive will come out of this ridiculous 35-foot buffer zone," she said. "You can't counsel someone from 35 feet."

The annual Assembly for Life, held in historic Faneuil Hall, is steeped in patriotic tradition. Participants recite the Pledge of Allegiance, sing the National Anthem and conclude with a rousing rendition of the "Battle Hymn of the Republic."

MCFL presented the Ignatius O'Connor Award to Francis Fox for his "outstanding contribution to the pro-life movement." He testified before the Supreme Court for Federal Election Commission (FEC) v. MCFL in 1986, which MCFL won.

The case began with a MCFL newsletter that presented the voting records and positions for 492 candidates for political office. Though it urged readers to "vote pro-life" a clause stipulated that MCFL did not endorse any particular candidate. The FEC conducted an investigation and brought suit.

Fox read his notes from the closing argument before the Supreme Court. He told the justices that the MCFL newsletter represented "the most puny threat" to the electoral process compared to other similar cases.

He concluded, "But when considered from the point of view of those basic freedoms that bind us all together -- freedom of speech, freedom of the press and, most importantly, freedom of association, that ability of like-minded people to band together and enhance their individual voices which would otherwise be faint and lost -- this may be the most significant case of them all."