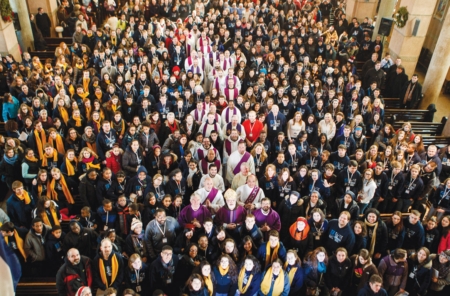 WASHINGTON -- Undeterred by snow and cold, hundreds of Boston pilgrims on the Youth Pilgrimage for Life to Washington walked shoulder-to-shoulder with a crowd of thousands at the 41st March for Life as witnesses to the Gospel of Life, Jan. 22.

The Weather Channel reported that at the hour the march started the temperature felt like four degrees below zero. But even before the pilgrims arrived in Washington, a snow storm that affected much of the East Coast the day prior to the march made simply arriving in Washington a challenge.

On Jan. 21, pilgrims on the way to the march faced long hours on buses slowed by slippery roads. The bus carrying the young adult group to Washington -- the last to depart Boston -- was even forced to abandon the trip and return home.

After long hours travel, Boston area youth and young people who traveled with the Office for the New Evangelization of Youth and Young Adults (ONE) arrived at George Mason University for music and adoration that featured Catholic recording artist Matt Maher.

The Boston group arrived late, but in time for Maher to remind them of the need for God to help them in their pilgrimage of public witness.

"Wouldn't it be great, before we move any further tonight, if we could just simply say, 'God, we need you. We can't accomplish this task on our own,'" he said.

After the evening of prayer and song rejuvenated the pilgrims from journey, Justin Constant-Corbin, a sophomore at Cardinal Spellman High School, told The Pilot exactly why he wanted to march in advocacy for the unborn -- to stop abortion.

"Everyone needs life. Everyone deserves it. There are people who can't choose to say no, because they can't talk, so we have to talk for them," he said.

Chris Carmody, a teacher who led students from St. Mary High School in Lynn, said the experience is more than just a chance to go to Washington and march.

"It's a whole pilgrimage. It's not just a 'let's travel to D.C. walk for a couple minutes and then head home.' It's a whole retreat experience," he said.

Jon Niven, who traveled with the students, provided music for Boston pilgrims during Masses, prayer services, and adoration during the trip.

On the morning of the march, the group joined seminarians, religious and other pilgrims at a Mass celebrated by Cardinal Seán P. O'Malley at the Shrine of the Sacred Heart in Washington. The Mass serves as an annual rally for the all the pilgrim groups from Boston.

"Welcome to sunny Washington," the cardinal joked with the pilgrims, "What a beautiful sight. I am so delighted that despite all of the difficulty, that practically everyone was able to make it here to Washington."

"The army of the defenders of life keeps getting younger and younger," the cardinal said.

As they do each year following the Mass with the cardinal, the Boston young people joined the 2014 March for Life as the leading banner passed the corner of Sixth Street and Constitution Ave.

Accompanying the Boston group, the cardinal walked alongside young people from schools and parishes in his archdiocese.

"I think that for us this is maybe the largest group we have had come from Boston and that is despite the bad weather, and the fact that one bus was left behind. We have over 1,000 people from Boston, between the young people, the seminarians, and the parishioners who come. That is a great testimony of how important the Gospel of Life is to us. The fact that people are here suffering in the cold is a witness to how important this is," the cardinal told The Pilot as he marched.

Father Eric F. Cadin, parochial vicar at Saint Michael Parish in North Andover, marched with a group of students before they arrived at the Supreme Court building to pray and hear stories of women and men whose lives have been impacted by abortion.

"I see a lot of hope for the future and encouragement as a priest that so many of the young are zealous and excited, and champions of life. I see, and am confident, that our truth of the goodness and the joy of life are being spread, by priests, by brothers, by sisters, by all the people, to encourage the young and encourage the world to embrace and to love life," he said.

After the March for Life, Boston ONE pilgrims returned to their buses and headed to St. Mary Parish in Landover Hills, Md.

At the parish, the young people and their adult chaperones shared their experiences of the march at a prayer service that included adoration, reconciliation and a talk from one of the priests traveling with the group.

"This was my first march. This was the first time I went, so I wasn't really sure what to expect. I think the thing that struck me was just how passionate everyone was. Everyone had their own way of going about the march. There were certain people who were praying, they were doing the rosary, and then there were other groups that were doing their chants and stuff," said Aidan Sullivan, a junior at Central Catholic in Lawrence said.

"It was just cool to see how all these very different people, from teenagers and middle-schoolers to older people, they all came together for such a cause," she added.

The next day, Father Matt Williams celebrated a Mass for the pilgrims in a chapel at the University of Maryland.

"We are here called to be witnesses to life," he said, as he organized a quick chant from the students before the Mass.

He broke the group into three sections and asked each to say one word of a rally chant, like at a sporting event.

And the last yelled, "life."

Young people traveling with ONE had an opportunity to experience some of the memorials in the capital, while others visited the United States Holocaust Memorial Museum.