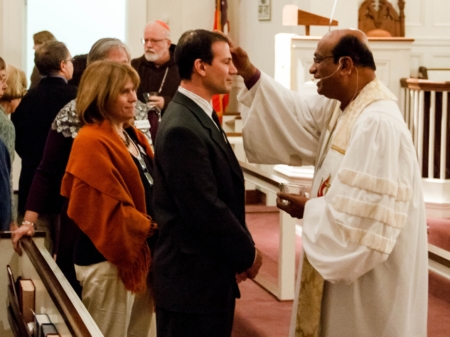 United Methodist Bishop Sudarshana Devadhar touches consecrated water, a reminder of baptism, to the head of Vito Nicastro of the archdiocese's Office for Ecumenical and Interreligious Affairs at an ecumenical prayer service Jan. 12 at Sudbury United Methodist Church. Cardinal Seán P. O'Malley presided at the service held to commemorate the 50th anniversary of a groundbreaking visit to the church by Cardinal Cushing. Pilot photo/Christopher S. Pineo

Rev. Joel B. Guillemette, pastor of Sudbury United Methodist Church, and Father Richard M. Erikson, the pastor of Our Lady of Fatima Parish in Sudbury, sponsored the prayer service with the help of their respective communities.

"The restoration of unity among Christians is one of the principal concerns of the Second Vatican Council," Cardinal O'Malley said in his homily at the service.

Cardinal O'Malley explained the significance of a sitting cardinal archbishop visiting a Protestant church of any denomination at that time.

"Some of us grew up in the days before the council and know how difficult relations among Christians often were. The word ecumenical was not part of our vocabulary," he said.

To illustrate his point, the cardinal told a story about his father needing to find a plumber when the pipes in their home froze one winter.

"Dad went to the yellow pages, and was looking up plumbers, and my mother chimed in saying, 'Be sure you call a Catholic,'" he said.

His father found a plumber by the first name Pius.

"We all agreed that no self-respecting Protestant would ever answer to that name. Hence, he was called upon to come and fix the pipes," the cardinal said.

But, Cardinal O'Malley pointed out, in today's world disunity among Christians makes it more difficult for all those who seek to live out Christ's call to spread the Good News.

"All indeed profess to be followers of the Lord, of different mind, and going different ways, as if Christ himself were divided. Such division openly contradicts the will of Christ, scandalizes the world, and damages the holy cause of preaching the Gospel to every creature," he said.

The date of the cardinal's visit coincided with the Sunday that Catholics and some Protestants celebrate the feast of the Baptism of the Lord.

In his homily, the cardinal highlighted the common point of unity through baptism in Christ, just before the congregation received blessings as they touched water or were touched by one of the two faith leaders with water in remembrance of baptism.

"By baptism we are grafted on to the body of Christ, we are part of the Lord, and connected to one-another. Today we are reminded that that connection joins us, Methodists and Catholics, in one Lord, one faith, one baptism," Cardinal O'Malley said.

"We do not want to trivialize the important issues that separate us, but we want to rediscover what unites us in the common heritage beginning with the Scriptures, our baptism, and our profession of faith in Jesus Christ as our Lord and Savior. Together we must learn to witness that the Kingdom of God is at hand," he said.

After the prayer service, the guests gathered for food and hospitality in the church hall.

Bishop Devadhar said he hoped such ecumenical prayer and worship together would lead to greater unity in social justice ministry and mission in the world.

"Maybe we can make another witness as Catholics and Protestants and Orthodox in this community by doing some common ministry together," Bishop Devadhar said.

He also said he hopes that youth and young people can come to more ecumenical events as a way of recharging their enthusiasm for Christianity.

Vito Nicastro, associate director of the Archdiocese of Boston's Office for Ecumenical and Interreligious Affairs, announced an Ecumenical Prayer for the Martyrs in the Week of Prayer for Christian Unity, Jan. 25, at the Basilica of Our Lady of Perpetual Help (Mission Church) in Boston.

Organized by Community of Sant'Egidio and The Office for Ecumenical and Interreligious Affairs, the service will honor the "memory of all those who gave their lives for the Gospel."

"This will be truly an ecumenical event and truly a remarkable opportunity for us to take another step together towards Christian unity," Nicastro said.

Many of those who attended the original gathering 50 years ago noted the length of Cardinal Cushing's speech that day.

Dorothy Morgan, who attended the church even before it became Methodist, was at the ecumenical gathering with Cardinal Cushing in 1964.

"He talked a long time, and I think we were just so overwhelmed by what he was to us. It was a pleasure that we got to hear him," she said.