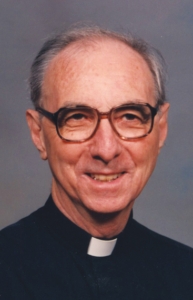 A Weymouth native where he was born on June 20, 1929 a son of the late James and Jennie (Caracciolo) Daniele. An alumnus of both Boston College High School ('47) and Boston College ('51) he entered St. John Seminary following graduation from BC.

Auxiliary Bishop Eric F. MacKenzie ordained him to the priesthood at Holy Name Church, West Roxbury on Feb. 2, 1956. Following ordination, he was named assistant at St. Anne Parish, Littleton and the following year as assistant at St. Mary, Plymouth. This would be his final parish assignment of his priestly ministry subsequently he was chaplain to the Grey Nuns in Lexington; at Cardinal Cushing College (Brookline); graduate student at NYU with residence at Cardinal Hayes High School in the Bronx; and then assigned to St. Sebastian School in Newton. Cardinal Law granted him senior priest retirement station on Nov. 15, 1995 when he was named resident chaplain at Fontbonne Convent, Milton.

Father Daniele's Funeral was celebrated at his home parish, Immaculate Conception, Weymouth on Jan. 16. Father George Carrigg, administrator of St. Christopher Parish, Dorchester was the principal celebrant; among those scheduled to be concelebrants were Msgr. Peter Martocchio, former pastor of the Weymouth parish and the present pastor, Father Joseph Rossi.