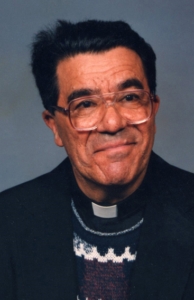 A priest with many different experiences of priestly life from missionary in Mozambique to pastor in Peabody, Father Antonio Medeiros died at Sacred Heart Home, New Bedford on Dec. 31, 2013.

Born in Ribeira Grande on St. Michael Island in the Azores on June 7, 1929 he was one of the nine children of the late Jose and Ana (da Silva) Medeiros. After seminary studies in Angra, Azores, he was ordained to the priesthood at San Salvador Cathedral, Angra on May 30, 1954 by the Angra's Bishop Guilherme A. Guimaraes. The following September he was in the missions of Mozambique at St. Peter and then St. John the Baptist Missions.

In 1969, he returned to Portugal and served for a year at St. Mamede Parish in the national capital, Lisbon. His missionary spirit brought him to New Bedford where from 1970 to 1974 he assisted at Immaculate Conception Parish. On May 4 he arrived in the archdiocese and served for several months as an associate at St. Michael Parish in Hudson ministering to the large Portuguese population in the town.

Incardinated into the archdiocese by fellow Azorean, Humberto Cardinal Medeiros on June 30, 1978; he had been named administrator of St. Anthony of Padua parish in Cambridge and while there he directed the construction of the new multi-million dollars church and parish center and rectory plant. Cardinal Medeiros dedicated the church in 1980. The following year Father Medeiros moved to Peabody first as administrator and then as pastor of the newly established Portuguese personal parish of Our Lady of Fatima. He served there until his retirement on Sept. 1, 1996. Not ready to cease his priestly service, he moved in residence to St. Anthony of Padua Parish in Lowell, and return to a similar position in his former parish in Cambridge in 1998.

Although he spent a good deal of his time, as many pastors do, on details of administration, he relished his time with Cursillo and retreat groups to which he gave more attention following his retirement.

Father Medeiros's Funeral Mass was celebrated on Jan. 7 at Immaculate Conception Church, New Bedford, the site of his initial priestly service in the United States. He was buried in St. John Cemetery, New Bedford. Father John Oliveira, pastor of Our Lady of Mount Carmel, the venerable Portuguese parish in the Whaling City served as the homilist.