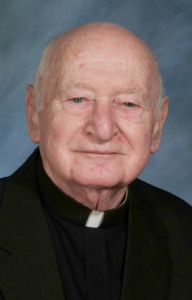 Educated at archdiocesan seminaries, Father Joyce was ordained on Feb. 2, 1960 at Holy Name Church, West Roxbury by Boston Auxiliary Bishop Thomas J. Riley. The bishop had previously been the rector of St. John Seminary for most of Father Joyce's student years there.

Father Joyce has had four parish assignments in the course of his priestly ministry. Following ordination, he was assigned as an assistant at St. Mary of the Assumption Parish in Brookline. In the more than nine years he was there he knew life in a busy city parish complete with elementary and high school, large convent of Sisters of St. Joseph and a compact population. His next 12 years were as an associate at Immaculate Conception Parish in Weymouth, followed by eight years right next door at Sacred Heart in Weymouth.

In October 1989, Cardinal Law named him pastor of St. Anne Parish in Boston's Readville section. The parish had recently completed the construction of its upper church, long a dream of several pastors and parishioners alike.

Over the course of the next 24 years at Readville, Father Joyce saw many changes and dramatic population shifts, many long time parishioners moved elsewhere or died, a common story in many urban parishes; those who arrived were either not Catholic or in need of evangelization.

One of the most difficult times during his term as pastor was the closing of the parish school. Once bustling with students and Sisters of Charity of Nazareth, the enrollment had dwindled below 100 and costs rose with income declining. In spite of his every effort, he came to the realization that the school would have to close. That this sad news was understood by parishioners and that they appreciated that he had done literally everything he could to avoid a closing was evident at the closing Mass. He received a standing ovation from the assembled students, staff, and families.

Recently a newly installed bishops complimenting his processor noted he was "an icon of canonical stability in office." The same might be rightly said about Father Joyce, four assignments in 50 years, and none more than ten miles from his native Dorchester.

Father Joyce will live in his family home in Milton in retirement.