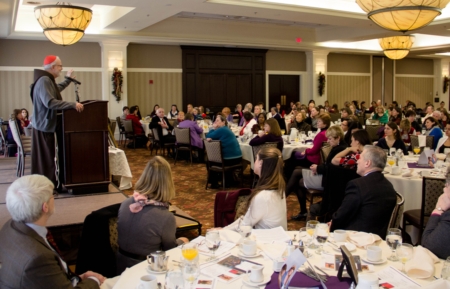 NORWOOD -- Members and supporters of Women Affirming Life gathered for their annual Advent Mass and Breakfast themed "Be the Gift," Dec. 14, at the Four Points by Sheraton in Norwood.

Cardinal Seán P. O'Malley celebrated the gathering's opening Mass for the 230 attendees in the hotel's Tiffany Ballroom. In his homily he focused on the call of Christians to stand up against what Pope John Paul II dubbed the "culture of death."

"The struggle on behalf of life is a spiritual combat. It demands our own personal conversion," he said.

Cardinal O'Malley compared the confrontation between Elijah and the Cult of Baal -- who sacrificed children to appease their god -- to the call of Christians to rise up against the culture of death.

He said John the Baptist became the new Elijah, and took up the same fight for life.

Cardinal O'Malley said when John the Baptist confronted King Herod for violating the law of the Old Testament by marrying his niece and the former wife of the king's own brother, he defended not just the old ways, but an institution fundamental to the pro-life movement.

"Our struggle against abortion also requires us to work to save the institution of marriage, and that's what John the Baptist was trying to do. It cost him his life," the cardinal said.

He also compared the fight for life with the experience of the Holy Family on the way to Bethlehem, as he described the Latin American tradition of "Las Posadas."

In the tradition, groups wander the streets singing like carolers, symbolically searching for a place for Christ to be born. In the end, hosts invite the guests in rather than turning them away, as happened to Joseph and the Virgin Mary.

After the Mass, guests gathered for breakfast and heard from director of the Pro-Life Office Marianne Luthin. Luthin introduced a panel of four speakers who developed the theme of the day by telling a story about a young mother who needed a winter coat. A parish organized a coat drive, someone drove the coats to the ministry office, and the volunteers there gave it to the woman.

"I mention that story as just one example of the many ways in which so many people had to come together in order to serve those who we encounter," she said.

Mary Jo Bacic's work in pro-life ministries inspired her daughter Meghan Bacic to take up the call as a young woman. The two first volunteered for a program donating dresses to poor people in Massachusetts, before they became volunteers for Pregnancy Help in Massachusetts, a group supporting women in crisis pregnancies.

"Our family has always been dedicated to volunteerism. We have been blessed and we are committed as a family to share with those in need," Mary Jo Bacic said.

Deacon Burkly helped found Deacons for Life in the Archdiocese of Boston. He said he used to spend one day each year dedicated to pro-life ministries at the March for Life in Washington.

"I would fully participate in that day, then stare out the window all night coming home, and I would wonder, 'What is wrong with our society? Why don't people get this? Why do I get it and they don't?'" he asked.

He retired from his practice as a lawyer and took up more active work on behalf of the unborn.

Kriz, who works at St. John's Seminary volunteers with Project Rachel in Natick, a pro-life ministry that helps women heal after abortion.

She shared an experience of helping with a retreat for women who have had abortions. She said that Luthin assigned her to pray for the women hoping to come, so that they could make it to the retreat.

She said seeing women at the retreat helped her realize that her prayers contributed to the ministry.

"I encourage all of you to pray. That is what we can do first-and-foremost. The power of prayer that I have discovered working with Marianne and Project Rachel, I could tell stories for days," Kriz said.

Women Affirming Life started working on behalf of the unborn in 1990 with the goals of bringing together and encouraging Catholic women to provide public witness, education, and prayer about life issues.