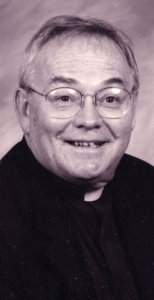 Father William MacKenzie died at St. Ann Nursing Home in Dover, N.H. on Dec. 12 following a lingering illness. Born on Feb. 6, 1940 he was the son of the late William and Marion (Corbin) MacKenzie. A member of the 1966 ordination class, he was ordained at Holy Cross Cathedral on May 26, 1966 by Richard Cardinal Cushing. He had completed his seminary studies first at Cardinal O'Connell Seminary, Jamaica Plain and then at St. John's, Brighton.

Concurrently in these assignments, he was Court Chaplain, in Plymouth; and served also as a member of the Emergency Response Team while residing at St. Catherine of Siena, Charlestown.

In 1988, he was named parochial vicar at St. Joseph, Medway and three years later pastor of the Medway parish. While pastor there he oversaw the construction of a much needed parish center. He served from 1991 to 1999 before being named pastor at Our Lady of Good Counsel in Quincy's Merrymount section. The parish was merged with other Quincy parishes in 2001 and he remained briefly as the parochial vicar in the new St. Elizabeth Ann Seton Parish.

In July 2001, he was granted disability status and in 2007 he was named a senior priest of the archdiocese.

By all accounts of his contemporaries he was a very bright man, and enjoyed challenging others ideas and opinions. He seemed to relish a verbal joust no matter who the opponent would be -- parishioner, pastor, classmate, or friend. He was fiercely proud of his opinions, and readily able and more than willing to defend them. More than once he chaffed at the misspelling of his name, when the "a" was missing from his last name, and he was more than happy to let you know about it.

Bishop Robert Hennessey was the principal celebrant of the Funeral Mass on Dec. 18 at St. Joseph Church, Medway. Father John Gentleman, the pastor of Sacred Heart, Manchester by the Sea and St. John the Baptist, Essex was the homilist; among those concelebrating the Mass were Msgr. Timothy Moran, present pastor of the parish; Fathers Austin Fleming, Stephen Boyle and James Broderick. Following the Mass Father MacKenzie was buried in St. Joseph Cemetery, Medway. His immediate survivors are three sisters: Kathleen Hilton and Rosemary Gately, both of Middleborough; and Jean MacKenzie of Buzzards Bay.