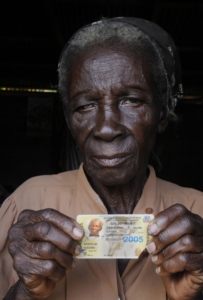 Sentilia Igsema, born in 1930 in the Dominican Republic to Haitian immigrants, shows her Dominican identity card outside her home in Batey La Higuera, in the eastern Seibo province, October 7, 2013. In September, the country's Constitutional Court issued a controversial decision effectively stripping families of Haitian immigrants like Igesma's of their Dominican nationality retroactively to 1929. Newscom photo/ Ricardo Rojas, Reuters

Cardinal Seán P. O'Malley is urging action on an immigration controversy that has strained relations between the Dominican Republic and Haiti, the two nations that share the island of Hispaniola.

In a Dec. 16 letter sent to the Dominican Republic's Ambassador to United States, Anibal de Castro Rodriguez, Cardinal O'Malley called on the government and people of the Dominican Republic to reject a high court decision that could render hundreds of thousands of Dominicans of Haitian descent "stateless."

On Sept. 23, the country's Constitutional Court ruled that children born to undocumented immigrants since 1929 would no longer be considered citizens.

"At Christmastime we relive the events of Christ's life, beginning with the Holy Family's search for lodging in Bethlehem where there was no room in the inn. It is my hope that at this Christmas season the government and people of the Dominican Republic will reject these unjust rulings that cause so much pain and suffering," the cardinal said in his letter, which was released to The Pilot Dec. 17.

According to a report on the ruling by the Center for Migration Studies of New York, prior to 2010 the Dominican constitution granted automatic citizenship to anyone born the country, except the children of diplomats and those whose parents were considered to be "in transit." "In transit" was interpreted to mean staying in country for 10 days for fewer.

However, according to the CMS, the "in transit" exception was often broadly applied by Dominican officials to deny children of undocumented Haitian immigrants an official birth certificate, which is a prerequisite for exercising a number of civil and economic rights including being married, registering for college, buying or selling property, obtaining a passport or registering the birth of one's own child.

The 2004 General Law on Migration officially defined the "in transit" exception as including the children of all non-residents, including undocumented immigrants. Then, in 2010, the country approved a new constitution that stated that a child would only receive automatic citizenship if at least one parent was already a Dominican citizen.

In its September ruling, which has been widely condemned by international and human rights organizations, the court found that the new standard could be applied retroactively to 1929.

"It is estimated that 200,000 Dominican people of Haitian descent, including many who have had no real connection with Haiti for several generations will be affected," Cardinal O'Malley said in the letter. "To be a person without a state, 'a man without a country' makes it nearly impossible to study, to get a decent job, to acquire insurance, to contribute to a pension fund, to get married legally, to open bank accounts and even to travel in or out of one's own country of origin."

In his letter, Cardinal O'Malley recounted his long association with the people of the Dominican Republic, ministering to Dominican communities in Washington, D.C., the Virgin Islands and Massachusetts and said he believes there can be greater harmony between the two nations.

"It is the destiny of the Dominican and Haitian peoples to share an island. Events of history have left their scars, but I believe that Dominicans and Haitians of goodwill long for a future of greater solidarity and friendship," the cardinal said.

Cardinal O'Malley cited the recent example of Dominicans who brought relief to Haiti following the 2010 earthquake and the experience he had 40 years ago as a young priest in Washington, D.C.

"I celebrated Mass for immigrants from the Dominican Republic and Haiti in the very same parish. I never saw any divisions or discrimination. The faith of the people and their common struggle to provide for their families united them in community," he said.

But, he said healing the historic divide between the two countries, which he described as being motivated by "racism," will not come without struggle and sacrifice.

"I hope and pray that the government and people of the Dominican Republic will be inspired by the ideals of the Gospel of Jesus Christ that appears on your beautiful national flag. The example of leaders like Martin Luther King and President Mandela points to the kind of resolve and humanity that is required to rid our world of the spiritual disease of racism," the cardinal said.

The cardinal closed his letter asking that the ambassador, "communicate to your government the concerns and disappointment of a priest who considers himself a friend to the people of the Dominican Republic."

"I pray that your leaders will have the wisdom and courage to redress these injustices that are being perpetrated on your own people," he added.

It was reported Dec. 17 that Haitian president Michel Martelly and Dominican president Danilo Medina have agreed to establish a joint commission to continue talks on the issue that had broken down in November.

(Editor's note: The full text of Cardinal O'Malley's letter can be found at TheBostonPilot.com.)