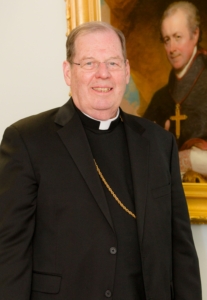 Vicar General Bishop Robert P. Deeley, pictured in a 2012 photo, has been named Bishop of Portland, Maine. He succeeds Bishop Richard J. Malone, who became bishop of Buffalo in 2012. The appointment was announced in Washington Dec. 18. Pilot photo/Gregory L. Tracy

BOSTON -- Pope Francis has appointed Vicar General and Moderator of the Curia of the Archdiocese of Boston Bishop Robert P. Deeley as the 12th bishop of the Diocese of Portland, Maine.

The appointment was announced Dec. 18 in Washington, D.C. by Archbishop Carlo Maria Vigano, apostolic nuncio to the United States.

Bishop Deeley, 67, succeeds Bishop Richard J. Malone, who was named bishop of Buffalo, N.Y. in May 2012.

Bishop Malone has served as administrator of the diocese since his appointment to Buffalo.

Bishop Deeley's installation Mass will be Feb. 14, 2014 at the Cathedral of the Immaculate Conception in Portland.

Speaking to The Pilot Dec. 18 from Portland, Bishop Deeley expressed his gratitude to the Holy Father for the appointment and thanked Cardinal O'Malley for his example as a "truly faithful shepherd."

"I carry his example with me as I go forth to take on this assignment as a shepherd here in Maine."

"I am grateful, as well, for the wonderful priests and the people of the archdiocese; the commitment, particularly, to our efforts in evangelization and the willingness of so many people to cooperate in all of the initiatives we began, particularly Disciples in Mission," he said.

Bishop Deeley also acknowledged the affection that Mainers have for Bishop Malone.

"They have enjoyed having him as their bishop and shepherd; I am happy to follow him," he said.

"I had worked with him in Boston; we started in the seminary together on the same day 39 years ago. We have been able to work together on many things over the years when we were both in Boston and now I am happy to be his successor. He leaves a diocese that has many, many good things happening in it."

Looking back at his life as a priest and bishop of the Archdiocese of Boston, Bishop Deeley emphasized his time as a pastor, which gave him the opportunity to bring people closer to the Lord.

Regarding his 30 months as vicar general, he said he was able to facilitate the process of strengthening parishes, which brought him great joy and great hope for the future of the archdiocese.

Bishop Deeley, who was appointed vicar general in 2011 and ordained to the episcopacy in 2012, was born in Cambridge and was raised in Belmont, the fourth in a family of five sons. His younger brother, Father Kevin Deeley, serves as pastor of St. Michael Parish in North Andover.

Bishop Deeley attended Matignon High School in North Cambridge, graduating in 1964. Following high school, he worked to discern a vocation to the priesthood at Cardinal O'Connell Minor Seminary in Jamaica Plain. He went on to study philosophy at The Catholic University of America in Washington, D.C., and graduated in 1968.

After a year of post-graduate studies, he attended the Pontifical North American College in Rome for his theological formation. At the Pontifical Gregorian University in Rome, he earned a degree in theology (S.T.B.) in 1972. Cardinal Humberto Medeiros ordained him to the priesthood at his home parish on July 14, 1973. He returned to the North American College in Rome for a doctorate in canon law (J.C.D) in 1986.

After returning to the archdiocese, he served on the Metropolitan Tribunal in various capacities. He was named judicial vicar, the archdiocese's top canon law official, in 1989 and became the president of the Canon Law Society of America in 2000. In 1999 he was also named pastor of St. Ann's Parish in Quincy.

Bishop Deeley's expertise in canon law led him to be called back to Rome in 2004 to serve at the Congregation for the Doctrine of the Faith, helping to work through the backlog of canonical cases relating to the clergy abuse scandal.

He continued his work at the Vatican until 2011, when he was named vicar general and moderator of the curia of the archdiocese. Pope Benedict XVI appointed him to be an auxiliary bishop of Boston on Nov. 9, 2011 and he was ordained to the episcopacy on Jan. 4, 2012 at the Cathedral of the Holy Cross.

During his service as vicar general under Cardinal Seán P. O'Malley, he oversaw several major initiatives, perhaps the most prominent being the planning and implementation of the Archdiocese of Boston's new pastoral plan, Disciples in Mission.