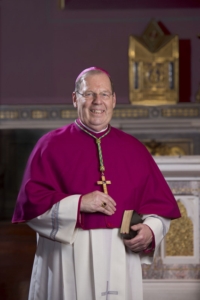 PORTLAND---Pope Francis has appointed the Most Rev. Robert P. Deeley, J.C.D., Auxiliary Bishop of the Archdiocese of Boston, as the 12th Bishop of the Roman Catholic Diocese of Portland.

The Holy Father's appointment was announced on Wednesday, December 18, at 6 a.m. EST at the Vatican. The date of Bishop Deeley's Installation Mass will be Friday, February 14, 2014, at the Cathedral of the Immaculate Conception in Portland.

"As I prepare to serve the faithful of the Diocese of Portland as their new bishop and shepherd, I wish to offer my gratitude first to our Holy Father Pope Francis for entrusting me with this honor and responsibility and to Cardinal Seán O'Malley, who has taught me much of what it means to be a faithful shepherd through his word and example," said Bishop Deeley in a statement. "Kindly pray for me and for all God's holy people that we may be what the Lord calls us to be, the community of the Church showing forth the love that God has shown us in his Son, Jesus."

Bishop Richard J. Malone, the current Apostolic Administrator of the Diocese of Portland, will hold a press conference this morning to introduce Bishop-Designate Deeley at the Diocese of Portland's Chancery Office, located on 510 Ocean Avenue in Portland, starting at 10 a.m. Media members are encouraged to attend and are asked to arrive no earlier than 9:30 a.m.

The Most Rev. Robert P. Deeley, 67, was ordained Auxiliary Bishop of Boston on January 4, 2013, at the Cathedral of the Holy Cross in Boston. He has served as Vicar General and Moderator of the Curia of the Archdiocese of Boston since September 1, 2011.

"We have known each other from the day we entered the seminary in September 1964," said Bishop Malone. "While our educational journeys and ministerial assignments took us in different directions, our paths have intersected many times in these nearly 40 years we have known each other. And so it is that I can promise the people of our great Diocese of Portland that they will be pastored by a man who is, in St. Timothy's words, truly 'strong, loving and wise' (2 Timothy 1:7). I know that our faithful people will welcome and collaborate with Bishop Deeley in the same spirit of warmth and openness that they showed to me in 2004 when Blessed John Paul II entrusted me with the pastoral leadership of the Diocese of Portland."

"Pope Francis has blessed the clergy, religious and faithful of the Diocese of Portland by naming the Most Rev. Robert P. Deeley as their twelfth bishop," said Cardinal Seán O'Malley, Archbishop of Boston. "The Archdiocese of Boston will greatly miss Bishop Deeley's leadership that follows from a deep love for the Church. In particular, guidance of Disciples in Mission, the Archdiocese's pastoral planning initiative, has helped us to begin the process of planning for the future. The Bishop's significant experience in the life and work of the universal Church will greatly assist the people he serves as they carry out the mission entrusted to them by Jesus Christ. Our prayerful congratulations are with Bishop Deeley as he goes forward to lead the Diocese of Portland."

Born in Cambridge, MA, Bishop Deeley grew up in Belmont, MA, as the fourth in a family of five sons. His parents, Michael and Mary, now deceased, were born in County Galway, Ireland. His family belonged to Sacred Heart Parish in Watertown, MA, and Bishop Deeley attended Matignon High School in North Cambridge. Following high school, he entered Cardinal O'Connell Minor Seminary in Jamaica Plain to discern a vocation to the priesthood. After two years of college, he received a Theodore Basselin Foundation Scholarship and began philosophy studies at The Catholic University of America in Washington, D.C., from which he graduated in 1968. In 1972, he earned a degree in Theology (S.T.B.) from the Pontifical Gregorian University in Rome. Following a year of continuing studies in theology, he returned to Boston and was ordained to the priesthood on July 14, 1973, at his home parish, Sacred Heart in Watertown.

His first local assignment was as associate pastor at St. Bartholomew parish in Needham. In 1978, with his appointment as Secretary to the Metropolitan Tribunal of the Archdiocese of Boston, Bishop Deeley began a ministry on the Tribunal which would last for over twenty years, the last ten of which he served as Judicial Vicar (1989-1999). Throughout that period, apart from his years of graduate study in Rome in Canon Law, he lived at Mary Immaculate of Lourdes Parish in Newton and St. Brigid Parish in Lexington where he was able to provide priestly presence and assistance. He was named a Prelate of Honor (Monsignor) on December 13, 1995.

Bishop Deeley was named pastor of St. Ann Parish in the Wollaston section of Quincy in 1999. He assumed the presidency of the Canon Law Society of America in 2000. He went to Rome in September 2004 to assist as an Official at the Congregation for the Doctrine of the Faith. Then, he served at the Congregation until being named Vicar General and Moderator of the Curia of the Archdiocese of Boston in the summer of 2011.

Additional materials will be provided at this morning's press conference and will be available online at www.portlanddiocese.org leading up to the Installation Mass on February 14, the feast day of St. Cyril and St. Methodius. For those unable to attend today, a second release will be issued this afternoon including coverage of the press conference.

For further information, please contact Dave Guthro, Communications Director for the Diocese of Portland at (207) 321-7810 or at dave.guthro@portlanddiocese.org.