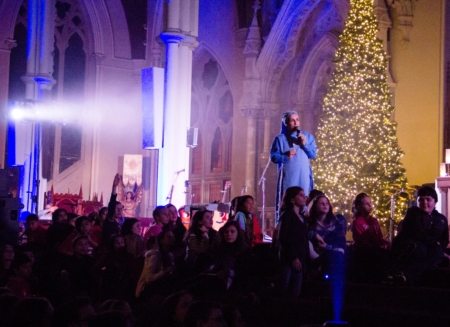 Mother Olga Yaqob, the speaker for the final night of the December 2013 God of This City Tour, leads young people in a discussion of the virtue of humility. Pilot photo/Christopher S. Pineo

SOUTH END -- To cap off the 2013 God of This City Tour, LIFT Ministries and the Office of the New Evangelization of Youth and Young Adults hosted a crowd of all ages, Dec. 6, at the Cathedral of the Holy Cross.

The cathedral was the final stop of the Dec. 2 through Dec. 6 tour, which included visits to St. Athanasius Church in Reading, Immaculate Conception Church in East Weymouth, Sacred Hearts Church in Bradford and St. Mary's Church in Holliston.

Cardinal Seán P. O'Malley reminded those at the gathering that the season of Advent focuses on models of the Christian faith whose contributions to the Church still impact daily Christian life.

He said when he speaks in public at Advent, children often ask him if he is Santa Claus.

"It's a wonderful question, because it reminds me who Santa Claus was. He was a bishop, and today is his feast day. December the sixth is St. Nicholas Day. It is one of the great figures of Advent. John the Baptist, the Blessed Mother, St. Nicholas -- these are some of the Advent figures that the Church holds up for us," Cardinal O'Malley said.

He said St. Nicholas was the first saint who was not a martyr.

"St. Nicholas is also very important to us because every Sunday at Mass, after the Prayer of the Faithful, we stand and together as a community we pray the Profession of Faith, The Nicene Creed. Well, St. Nicholas was one of the authors of that prayer. So, every Sunday I want you to remember when you are praying the creed, you are praying Santa Claus' prayer," the cardinal said.

Jon Niven and his band provided music for the tour, with speakers and lights at the cathedral that resembled a rock concert.

At her talk on the final night of the tour Mother Olga Yaqob, founder of the Daughters of Mary of Nazareth, asked younger children to come sit at the foot of the altar. She showed a clip from the film "Restless Heart: Confessions of Augustine" to develop the theme of her talk, then asked the children what they saw in the scene.

The scene showed St. Augustine accused of living a worldly life style, a charge he did not deny but embraced.

Mother Olga engaged her audience through a number of responses as they tried to hit on the theme of her talk, until one young person on the floor in front of the altar finally got it -- humility.

She said that St. Anthony and St. Teresa described humility as a foundational virtue in the Christian life.

She related the theme of humility to the ways in which Catholics see the image of the Lord Jesus Christ as a baby in the manger, on the crucifix, and in the form of the Eucharist.

"God incarnated in humility in the form of a child," Mother Olga said.

She invited children to hold up one of each and noted that the host used in her talk had not been consecrated.

"In his humility there is power. He gave it all. His hands are open from nativity, to the cross, to the real presence, he gave it all. You see? Humility gives. Pride takes. Correct? And, that is why this is our foundation as Christians baptized in the name of Jesus Christ," she said.

Having traveled to the various parishes, the tour brought prayer intentions to the cathedral for the final evening that concluded with eucharistic adoration.