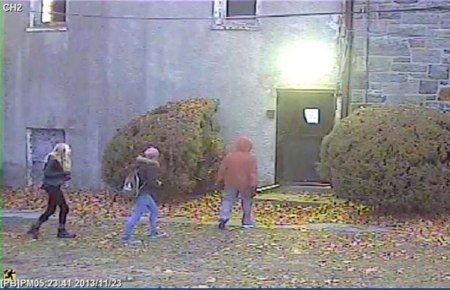 Boston Police are looking to identify the three people seen in this surveillance image in connection with a break-in at the Our Lady of the Presentation Lecture Hall and Library last week. Pilot photo/Boston Police Dept.

BRIGHTON -- As police investigate a break in at St. John's Seminary's recently-opened Our Lady of the Presentation Lecture Hall and Library, the schedule of public events continues after crews cleaned up damages.

According to Boston Police Department logs, officers from District D-14 in Brighton responded to a radio call for a breaking and entering in the area on Nov. 27 and spoke to a witness who said unknown suspects damaged three doors and gained entry to the Church sometime between 3 p.m. Nov. 23 and 11:30 a.m. Nov. 25. As part of the investigation, police reached out using Twitter, Facebook and their website to make still pictures of the three suspects, taken from surveillance cameras at the site, available to the public.

The rector of the seminary, Msgr. James P. Moroney spoke to The Pilot just before a public event, "A History of Christmas in Western Art" on Dec. 2. The event continued as scheduled despite the vandalism the previous week at the Oak Square lecture hall.

"Everything is in fine shape, ready for tonight's presentation," he said.

"It was basically an act of vandalism with the discharge of some fire extinguishers, turning things over, and just general mischief making, but there was some damage to the building as well," Msgr. Moroney said.

BPD gave a detailed account of the damage on their website, as well as inviting the public to share information on the three suspects who appear inside and outside the former parish on surveillance footage.

As well as cutting damage to the painting, it was defaced with the phrases "Devil's Star," "(Expletive) God," and "Scooby Doo."

According to the police report, officers also found a bag of Tostito chips, a container of Pringles, a bottle of Sprite, a water bottle, and a half empty bottle of Italian wine at the scene.

Msgr. Moroney said the breakin and resulting damages did not impede scheduled public events at the library and lecture hall, but that he hoped the perpetrators would be brought to justice quickly. He also said the prayers of the seminary go out to the suspects.

"Hopefully this will be a small incident in the lives of these young people that they can grow from and move on from in the future," he said.

Msgr. Moroney added that the future saint whose image was vandalized would also likely pray for the suspects, who appear young based on photos on the police website.

"I'm sure even Blessed John XXIII, whose portrait was defaced, would pray and will intercede for them from heaven. He was a great patron of young people, and I am sure he continues to be," he said.

Msgr. Moroney thanked the construction company that has been handling renovations at the library and lecture hall for their hard work and sacrifice as they facilitated a quick clean up.

"Frank Fulginiti, of Fulginiti Construction, worked over the weekend with his crews in order to clean up the damage from the vandalism," Msgr. Moroney said.

Fulginiti, the owner of the Stoughton construction firm, said he and his crews also contributed to the investigation by taking detailed photos of the damage and providing surveillance footage to the BPD.

"When we do commercial jobs, we always put security cameras up, not only to protect our client, but to protect our own equipment that is in the building," Fulginiti said.

"We have quite a few miles of footage, on eight cameras, that we turned over to the police," he said.

Fulginiti said his construction company remains dedicated to restoring the library and lecture hall, as further renovation continues, because of the former church's special place in the Oak Square community.

"It's a big job. It's a long group of phases and stages to get it complete. This is Msgr. Moroney's dream and St. John's dream to have a nice local place that people can come in and visit all these archived books and learn about canon law, and learn more about their religion," Fulginiti said.

The Boston Police Department is actively investigating facts and circumstances surrounding this incident. Anyone with information is asked to call District D-14 (Brighton) detectives at 617-343-4256.

Community members wishing to assist this investigation anonymously can do so by calling CrimeStoppers at 1(800) 494-TIPS (8477) or by texting the word 'TIP' to CRIME (27463).