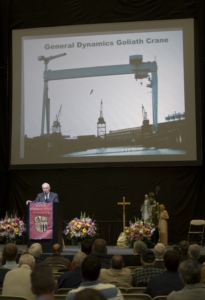 Sports fans love to debate whether a particular professional athlete's accomplishments over a long period of time are worthy of the particular sport's hall of fame. Within the Catholic Church, I like to think that we have our "eternal hall of fame" made up of the saints in heaven. At a more local level, each diocese and each parish has been made up of "hall of famers" that have defined great role models and leaders from each community of faithful disciples.

In my mind, Jack Shaughnessy Sr., who died on Nov. 27, is a first-ballot hall of famer for the Catholic Church in the Archdiocese of Boston. The date of this issue, Dec 6, would have been his 87th birthday. Jack inspired so many people, including me, to be more faithful Catholics, better husbands, more devoted fathers, more involved friends and more cheerful givers in support of the Church and so many organizations doing great work locally to care for others.

At Jack's funeral last Saturday, Cardinal Seán O'Malley described Jack as a hard-working and diligent leader who prioritized his faith and his family. Jack lived life simply and, as his son Stephen remarked, truly believed the Scriptural passage of Matthew 19:24, that it is easier for a camel to pass through the eye of a needle than for a rich man to get into heaven. Jack, therefore, was detached from his wealth and was extremely generous with his time and financial gifts to many organizations. Stephen noted that about a decade ago Jack went through an IRS audit because his pattern of charitable gifts exceeded all reasonable norms.

Despite his level of financial support for so many Church ministries and charitable organizations, Jack never liked being described as a philanthropist. He once shared with me how, as a young man, he was moved by the passage from 2 Corinthians 9:7, "God loves a cheerful giver." Jack continued by saying that "one cannot outdo God's generosity to Cheerful Givers" and then Jack shared with me how he felt that God had blessed him tremendously with the love of his wife, Mary, for more than 50 years, his 7 children, 17 grandchildren and 7 great grandchildren (and counting). How happy Jack always was in talking about his family as a huge gift of God! Cardinal Seán mentioned that when he would conclude a call with Jack, the cardinal would say, "God Bless you," and Jack would always respond, "He already has."

Jack was born in 1926 and grew up in Quincy, attending Boston College High School, which formed Jack to be a "man for others." He graduated from Tufts University in 1946 and then entered the Navy, serving on a destroyer for 2 years. In 1948, he returned home to help his father, whose health was failing, to run their family's business, Shaughnessy and Ahern Co., which was a large crane and rigging company. He grew the business significantly over the next few decades and became of one Boston's leading business leaders. His firm contributed to building most of our area's famous structures.

In the early part of his business career, Jack suffered a devastating financial setback after he refused to participate in a kickback and extortion scheme involving the Goliath Crane project at the Quincy Shipyard. The businessman that tried to pressure Jack into this scheme was later indicted. In his moment of despair, Jack picked up a Bible, asked God to see where he was in the situation, and then was led to open the Book of Job, the Old Testament story of faithfulness to God despite great hardships. Jack was never the same after that experience with God, and he led many to deeper faith in God through sharing both his story and the story of Job. Jack's keynote address at the 2008 Boston Catholic Men's Conference on this topic can be watched at JackShaughnessy.net.

Driven by his deep faith, work ethic and caring soul, Jack gave his time and shared his financial resources over the last half-century with nearly every major Catholic institution of our archdiocese. Among the many organizations he has helped are the Shaughnessy Family Center at Laboure in South Boston, Boston College High School, The Catholic Appeal, Blessed John XXIII National Seminary, St. John's Seminary, Caritas Carney Hospital, Caritas St. Elizabeth's Medical Center, Catholic Charities, Nativity Prep, the Oblates of the Virgin Mary, the Archdiocesan Mexican Sisters Program and the Boston Catholic Men's and Women's Conferences. He has also been actively involved in supporting My Brother's Keeper, the Ron Burton Training Village, Health Care for the Homeless, and Project Bread.

Jack died a happy death, telling his family that he was looking forward to meeting Christ in Heaven and to being reunited with his dear Mary. For two hours, his family prayed with Jack at his bedside. Jack's final words were the Memorare, asking the Blessed Mother to care for him as he passed into eternal life and to lead him to meet her Son.

Cardinal Seán noted that the timing of Jack's death and funeral was notable. Jack died during November, the month we remember to pray for the dead. Jack always wanted his funeral to be on a Saturday -- the day of the Blessed Mother, and also the day that hard-working people wouldn't have to take off work or school to attend! He was buried on the final day of the Church's liturgical year, in which the Church focuses our attention on the final things in this life. Finally, Jack died at the time of the Thanksgiving holidays, when he was able to thank God for all of God's blessings and we, the Catholic community in the Archdiocese of Boston, were able to thank God for this great leader, hall of famer and cheerful giver.

Scot Landry is executive director of Catholic Voices USA and the host of The Good Catholic Life radio program on 1060AM.