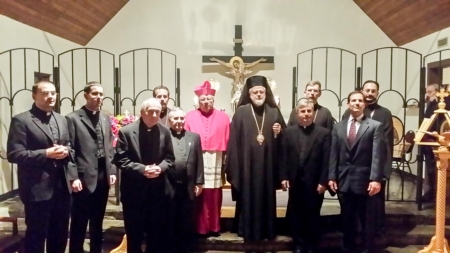 Members of the delegation from the archdiocese led by Bishop Arthur Kennedy are pictured with Greek Orthodox Metropolitan Methodios and orthodox clergy at the Nov. 29 celebration of the Feast of St. Andrew at the Greek Orthodox Cathedral Center Chapel in Brookline. Courtesy photo

BROOKLINE -- The Greek Orthodox Metropolis of Boston continued a shared ecumenical tradition by hosting representatives from the Archdiocese of Boston, Nov. 29, to celebrate the Feast of St. Andrew at the Greek Orthodox Cathedral Center Chapel in Brookline.

Since 1996, it has become a tradition for the Orthodox Metropolis to invite Catholics to their celebration of the patron of Constantinople, and the archdiocese to invite Orthodox to celebrate the feast of Sts. Peter and Paul, patron saints of the Church of Rome.

In his homily at the service, Father Dean Panagos spoke of the current successors to the apostles Peter and Andrew.

"I can imagine St. Peter looking upon his successor Francis, striking a note when he said; 'I prefer a Church which is bruised, hurting and dirty because it has been out on the streets, rather than a Church which is unhealthy from being confined and from clinging to its own security,'" he said.

"I can imagine St. Andrew looking upon his successor Bartholomew, listening to the cords of the Archdiocese Byzantine Choir chanting hymns in honor of Andrew in the Church of Saint Irene while hearing the voice of Turkish government officials calling for Saint Sophia, located adjacent to Saint Irene, to become a mosque again."

Associate director of the archdiocesan ecumenical and interreligious office Vito Nicastro said the traditional exchange of delegations rings of the family connection between St. Peter and his brother St. Andrew.

The exchange mirrors a tradition established between the two Christian communities in Rome and Constantinople.

"The significance of the Greek Orthodox Metropolis of Boston, led by His Eminence Metropolitan Methodios, inviting a delegation from the Roman Catholic Archdiocese of Boston, led this time by His Excellency Bishop Arthur Kennedy, is a gesture of fidelity to the Lord's will that we be one and the pursuit of Christian unity," Nicastro said.

As the custom continues next June, a representative from the Greek Orthodox Church is to attend a Mass at the Cathedral of the Holy Cross on the feast of St. Peter.

"It's a celebration of how much we have in common in our faith, which we received from the apostles, and it's also a very special heritage of the Churches of Boston, built by Metropolitan Methodios along with Cardinal Seán and his predecessors, the previous cardinals of Boston," Nicastro said.