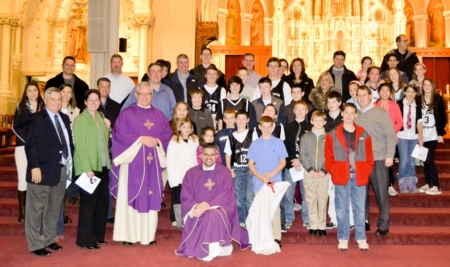 The group from the CYO basketball program at St. Denis and St. Margaret Mary in Westwood are pictured with Father Matt Williams following the Mass. Pilot photo/courtesy Gail Mattulina

SOUTH END -- Father Matt Williams, Director of the Office for the New Evangelization of Youth and Young Adults, celebrated a Mass at the Cathedral of the Holy Cross on Dec. 1 to kick off the 2013-2014 CYO basketball season.

Approximately 300 players, parents, coaches, and area coordinators attended the Mass, held in memory of Peter Williams, Director of CYO for the Office for the New Evangelization of Youth and Young Adults who passed away in September after over 50 years of service to the Archdiocese of Boston in CYO Athletics.

Father Williams spoke about the director and his dedication to the Church and to CYO during his homily and asked that everyone remain prayerful during Advent, remembering that all things come from God through his son, Jesus Christ.

Peter William's sons Sean and Stephen served as the gift bearers for the Mass.