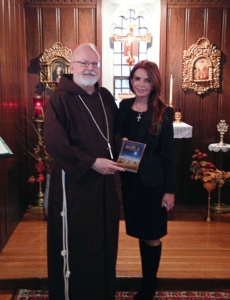 'Friday (11/22), I met with Roma Downey at the cathedral... She came also to talk about her newest project that revolves around the life of Christ, called Son of God.' Pilot photo/CardinalSeansBlog.org

We were all very enthused to see the publication this week (11/26) of the Holy Father's Apostolic Exhortation ''Evangelii Gaudium."

...Many of the themes are ones that he has often spoken about in his conferences, audiences and homilies. Certainly, we see his great desire to make the Church one that is compassionate, that is a community of faith overcoming the globalization of indifference, one in which people are concerned about the homeless person who dies because they are exposed to the elements, and where the economy must be at the service of humanity and not an exercise in greed and selfishness. The Holy Father, of course coming from Latin America and having seen in many countries great poverty and suffering, is very strong in his analysis.

He is also challenging us in our preaching to be able to reach the people, to bring the message of Christ and to express the joy of our faith. Indeed, even the name of this Apostolic Exhortation betokens the kind of enthusiasm that the Holy Father exudes when it comes to evangelization and sharing the good news of the Gospel to the world. Also, the Holy Father, while stressing compassion and forgiveness, is also very quick to point out the preciousness of life in our obligation to defend it. He sees abortion as an attack on life, and not a solution to people's problems. But, at the same time, he recognizes that people often fail to reach out to women in their moments of crisis, to help them to be able to make a better decision and to be able to save their children. It is an extraordinary document that is very doctrinal in its expression, but at the same time like all the Holy Father's teachings, it is very accessible. I believe it is not a document that people will find off-putting or difficult to receive. The message of the Apostolic Exhortation is quite beautiful, and I would encourage everyone to read it firsthand.

Last Thursday (11/21) we had a reception here at the Pastoral Center for those who work in the archdiocese and have been so supportive of our Catholic Appeal. It was an opportunity for me to personally thank our staff for their participation in the Appeal and their work on behalf of the Catholic appeal. The money that comes in from the Catholic Appeal is the lifeblood of the archdiocese and allows us to fulfill so many aspects of our mission. We are particularly grateful for the benefactors who support us, realizing that there are more claims on the services of the Church during hard economic times.

Friday (11/22), I met with Roma Downey at the cathedral. Cardinal Wuerl had suggested that she come and see me. ...I came to find out she was the star of "Touched by an Angel," which was a very popular television program. She also created the Bible series on The History Channel, which I understand was one of the most-watched television series they have produced. It was very widely acclaimed as a very beautiful and cogent exposition of biblical history. She gave me a copy of the DVD of that program. She came also to talk about her newest project that revolves around the life of Christ, called ''Son of God," that will come out in February. She showed me some clips from the film. I was very encouraged by what I saw and I think this will be a wonderful movie that will expose many Americans to the life of Christ and the Gospel.

Friday evening, I had Vespers and dinner with our seminarians who are in their third year of theology. As I have mentioned, I have been meeting with the seminarians by class with the goal of getting to know them better and spending some time with them. We gathered for Vespers, followed by dinner and a long conversation. It was a very encouraging and wonderful evening.