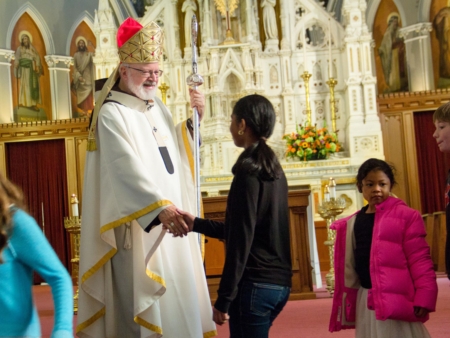 SOUTH END -- At the closing Mass for the Year of Faith, Nov. 24, Cardinal Seán P. O'Malley said the year-long celebration called Catholics to revisit their faith and share it with the world.

Declared by Pope Benedict XVI in his October 2011 apostolic letter "Porta Fidei," the Year of Faith began in 2012 and marked the 50th anniversary of the Second Vatican Council, with a focus on efforts to reinvigorate Catholic faith through continued conversion. It concluded on the Solemnity of Christ the King, the last Sunday of the liturgical year.

"This Year of Faith has been a call to all of us Catholics to learn more about our faith and to have the sense of responsibility and mission that will lead us to share that faith with others," he said.

He said that Catholics can share the Gospel by the simple day-to-day witness of their faith.

"The Holy Father has said our Church doesn't grow by proselytizing, our Church grows by attraction. When people discover the beauty of the Catholic faith, the sacraments, our Tradition, then they want to be a part of our family," Cardinal O'Malley said.

The cardinal recalled the 2008 visit to the United States by Pope Benedict XVI, during which he celebrated a Mass at St. Patrick's Cathedral in New York. During the homily that day, Pope Benedict compared the beauty of the Church with the beauty of stained glass windows.

"He said, you know, when you come upon this cathedral and you see the stained glass windows from the outside, they are really dark and dreary, but when you come into the church and see them from the inside, then you are filled with light, color and beauty," the cardinal recalled.

"So it is with the Church. When people see the Church only from the outside, it may seem very dark and dreary, but when we see the Church from the inside then we catch a glimpse of God's love and his beauty reflected in the wonderful gifts he has given to his Church," he said, adding that Catholics must strive to be the Church that is user friendly, welcoming, and where people endeavor to become disciples in a community of faith.

"Can you imagine if you went to your grandmother's house for Thanksgiving and discovered that the mashed potatoes were a little lumpy, the turkey was too dry, and the pumpkin pie tasted like Styrofoam? I don't think you'd say, 'I'm not coming back here next year.' But rather you'd say, 'Grandma needs some help. We better contribute a little more to this effort.' And so it is with our Church and with our parishes," Cardinal O'Malley said.

He said Catholics need to identify with the Church and their parish as they would with their family, and feel a responsibility for what is or is not accomplished in that family.

In closing he called on Catholics to consider the cross in their attempts to reach out or to work on behalf of the Church.

"The cross is Jesus' throne. His crown is of thorns. His courtiers are two thieves. Yet that cross is an instrument on which Christ conquered sin and death for us," he said.

After the Mass, the episcopal vicar for the New Evangelization, Bishop Arthur L. Kennedy told The Pilot that the Year of Faith was a year of reawakening.

"It was (held) in order to begin to reinvigorate people's sense of God, and in others to deepen the sense of God. It is a year for reawakening the soul to the mystery of God in the person of Jesus, and through Jesus of the Church. So, it really stands as a preamble for the whole of the new evangelization, which continues to go forward," he said.