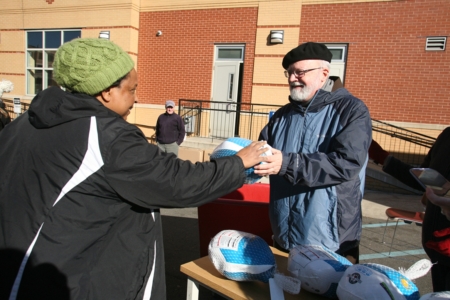 The distribution was part of a collaborative effort between Catholic Charities and the United Way of Massachusetts Bay and Merrimack Valley to distribute nearly 5,000 Thanksgiving meals to families in need throughout Boston and the surrounding communities this month.

Thanksgiving baskets, consisting of more than 100,000 total pounds of food, were distributed in Dorchester, Boston's South End, Brockton, South Boston and Lowell. Volunteers from UMass Lowell were on hand to assist with distribution of donated turkeys at their school.

"The Thanksgiving Project has grown tremendously in recent years, not only due to the increased need in our communities, but thanks to the generous support of our partners and volunteers," said Michael Durkin, President of United Way of Massachusetts Bay and Merrimack Valley. "These Thanksgiving baskets are important not only because they provide a celebratory meal to a struggling family, but because they allow families to enjoy the holiday without having to make damaging sacrifices in other crucial areas of their budget."

In addition to corporate support, more than 500 local volunteers donated their time packaging the meals at Hynes Convention Center and distributing the meals throughout the region.