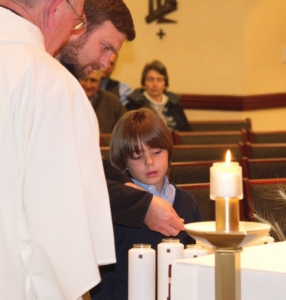 On the Feast of Our Lord Jesus Christ, King of the Universe, Father Kevin M. Sepe, the Episcopal Vicar for Clergy, celebrated the Annual Memorial Mass for deacons and wives of deacons who have died since the first class of permanent deacons were ordained in the Boston Archdiocese in 1976. Deacons Patrick Guerrini and Paul Coughlin assisted Father Sepe.

For the children and immediate family of deacons it was an occasion to remember the distinctive gift of faith and service that each loved one brought to their family and community. Joseph Mills, the youngest of 16 children of Deacon Chester Mills, who died this year, expressed his appreciation for the gift of having a "spiritual guide" so close to him in his life.

For Deacon John Menz and his wife Eileen, it was an occasion to gather with other classmates and remember the loss of several classmates ordained in 1976. From the same class was Mrs. John Steuterman, whose husband Deacon John died several years ago.

The Order of Deacons was restored as a permanent and public ministry in the Latin Church following the Second Vatican Council in 1968. In Boston, the first class was ordained in 1976.

A deacon is an ordained member of Christ's faithful and serves a three-fold ministry of Word, Liturgy, and Charity, working in obedience to his bishop and in close cooperation with the priests of the diocese. Through Holy Orders, the deacon acquires a special relationship to the bishop. While all Christians are called to serve others, the deacon is an icon of the Servant Christ in the Church.

There are now more than 16,000 permanent deacons ministering in the United States. There are more than 270 deacons in the Archdiocese of Boston, and 43 men currently in formation.

The deacon should be a creative leader, one who gradually initiates a meaningful response of loving service from the community to those who are in spiritual or material need. For more information please look at the diaconate website www.bostondiaconate.org, or contact Deacon Dan Burns, Director of Formation, deacondan_burns@rcab.org.