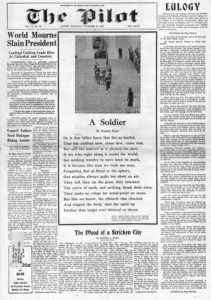 The following article is reprinted from the Nov. 30, 1963 edition of The Pilot. In it, Pilot staff writer George E. Ryan, who would later go on to be managing editor, recounts his experience in Washington, D.C. in the days following President Kennedy's Nov. 22 assassination and of his Nov. 25 funeral.

The Washington of last weekend was not so much a shocked city as a dispirited one, not so much a city in mourning and sorrow as one confused and deeply disappointed.

Washington, D.C., from the day after John Kennedy died until the day he was buried, was a city keenly, relentlessly conscious of the wasteful act that had robbed it of its most distinguished and promising resident.

Our hotel lobby was the one little world that characterized the universe on that fateful weekend. Constantly busy, outwardly awake and alive, continually trying to behave as though all were well in the world, the lobby was nonetheless a kind of satire on the truth, the miserable truth that haunted the District's every inch.

In one corner of the lobby, an airlines poster screamed and shouted the beauties of Texas; by jet, it said, you could be down there in a few short hours--to Dallas, for example.

In another corner, 3 inch busts of Jack and Jackie could he bought as souvenirs of the capital city of civilization. The news stand bulged with biographies--stories of the life, the life, of the President. Evangelist Billy Graham passed through, as well as Germany's Willy Brandt and Ludwig Erhard, all bent on the same sad mission of the day. A notice in the elevator said there were "No Functions Scheduled Today." Headlines insisted that what you couldn't quite believe was, in fact, true. Conversations were muted. No one smiled. Oddly, you rarely heard the name Kennedy because "he" always meant the President, "she" was his wife, "they" were undoubtedly the children, and "it" could only mean an assassination.

Early Saturday night was filled with rain and glistening streets. Enroute to the White House area, one saw only occasional pedestrians, and whatever real activity there was related directly to the sad journey that would wend its way to the Capitol next day.

One shop window, typical of most, featured a vase of white chrysanthemums and picture of the President, ribboned in black. Another made bold to say that "Because of This great national tragedy," the shop would be closed Sunday and Monday. Still another had its shades drawn tight to the bottom of the window.

Along the streets, television technicians worked into the night to set up booths and scaffolding along the line of march. Cameras were draped with plastic covers. Halfmast flags were everywhere, even on the dashboards of cabs. The White House police, encased in heavy rain coats and boots, politely kept the walkers moving. Entrances to the first family's home were "Closed to Visitors." Much of the whispered comment was in languages not English, and many of the references along Pennsylvania Avenue were to the swirling shrouds so stark black against the White House white.

Ironically, the famous fountain on the lawn sprayed and leaped and danced and seemed happy, as though, behind the floodlights and lowered curtains, a family was still intact.

As one traipsed the streets, the moon and stars quietly took over the Washington sky, shedding their dim light on this stricken city.

As rain and gloom seemed appropriate only moments before, now it seemed even more so that the mighty heavens should at last open and look down upon mere humanity in travail.

Grasping at straws, maybe; seizing on anything at all that would help dispel the darkness, perhaps; but having the heavens bright at last seemed most welcome, a tiny blessing in an atmosphere of most oppressive sadness.

Suddenly, one found joy in knowing that tomorrow -- the day his body would be taken to the Capitol rotunda--would be fair and warmer, temperatures in the 50s.

Sunday, that Sunday, had to begin with Mass perhaps more than any other, and so, fulfilling several obligations, one took himself to the chapel at Trinity College where, in far happier days, the vigor and hope and promise and optimism of President Kennedy's generation were things one took quite for granted. In that sanctuary, designed by a Bostonian, you thought of other Bostonians, of how they lived and loved. And died.

Afterwards, with the nuns you knew when the world was young, you talked of all kinds of things, but always returned to the Massachusetts man whose mark in the world reached its pinnacle in this very city.

And, since you were visiting a college for young women, you learned afresh that the girls' attentions were on Jackie, the beautiful girl whose style they imitated, and whose role as wife and mother they hoped some time to play so well. In their way, the girls of Trinity had anticipated the admiration of the whole world for a uniquely brave young lady. To mark their devotion, many had forced the chapel to remain open the entire night.

Mass over, it was especially fitting that a small knot of Bostonians should gather in the Trinity lounge to join Cardinal Cushing in his TV Mass; the circle seemed complete: Boston's Archbishop offered a Requiem for one of his own parishioners, while other Bostonians joined him over the miles.

Downtown again, the city and its thousands geared for the next great shock: Seeing the mournful procession that would contain "her" and "the children," and the body of the man who thought to nickname his son JohnJohn.

And shock it was indeed. On the Capitol plaza, several thousand people murmured, murmured only, and stood still. They followed the progress of the cortege on transistor radios, and waited for the first muffled sound of drums to come over the gentle hill.

When the sound came, that of hoofbeats was just behind, and then came the sleek cars that bore the Kennedys, all but two--the President's father was still recuperating on the Cape. Seeing the horses, one without his rider, and the uniforms, and the rest of the storybook panoply that accompanies such sights, was no more than one expected.

But Caroline and JohnJohn, when they stepped from the limousine, wore light blue coats, and their mother walked alone with them up the steps of the Capitol!

Somehow, that touch of color in the funereal context was heartbreaking, and tears that till now had known their place spilled out and flowed freely. Presidents and kings and younger brothers could steel us all and look right in black, but only a child could wear blue and make you cry.

Thousands agreed; the single wave of sound that crowd could make was made when Mrs. Kennedy, majestic and composed, led her children into the Capitol rotunda.

Washington that night was a massive wake, a capital in repose and enormously unhappy. Everyone devoured the newspapers and, shamefully to be sure, seemed indifferent at first to the murder of the man supposed to have killed the President. In what was perhaps its finest hour, television brought the news of the day in the minutest detail.

At St. Matthew's Cathedral, a golden swath trimmed in black was spread across the redbrick front, while men of the Secret Service gently discouraged the curious. Some wanted to stay there the night. Others merely wanted to see the church from which he would be buried the next day.

But, the guard said, only government officials were welcome, they and telephone men who were even then installing the 'phones that would accompany President Johnson during Mass.

How strange, yet necessary, that science must follow modern man to the brink of the grave. Life would go on, 'phones might ring, morning Mass would be celebrated for the parish, and John Kennedy's body would come there soon.

Meanwhile, hundreds of thousands of admiring Americans, impelled to offer some sacrifice in the face of his sacrifice, stood all night five abreast for 46 Washington blocks and hoped to view his casket; 50,000 did not.

Monday's procession to the Cathedral was no more or less than muted magnificence, a muffled march that placed the Emperor of Ethiopia beside a Prince of Britain, and a Greek Queen beside a boy of three.

What followed that march was easily the most widely witnessed rife in history--Cardinal Cushing's celebration of the Kennedy requiem, with the world looking on.

Again, one was proud that our Archbishop took such a prominent role, at St. Matthew's and Arlington, and saw to the end the man he married and whose children he baptized and whose family were his friends. What more could man do than be there, this way, when death finally came.

The route home had two highlights, both of which seemed at first less important than they actually were. Between the hotel and the airport, our cab was suddenly halted at a side entrance to the White House, an interruption that seemed sure to have us miss our plane. But almost immediately, three black cars sped across the intersection just before us, the cars bearing the Kennedys back from Arlington.

And later, climbing over the city bound for home, a vagrant cloud obscured our last view of the massive Capitol where lately lay the President's body. When it passed, however, clearly visible from the sky over Washington, was the country's National Shrine of the Immaculate Conception.

How fitting that the last familiar sight to see on the day of our president's burial was a National Shrine. One couldn't help but link a basilica with a Kennedy, and discover ways to see them both heroic in their Fashion.